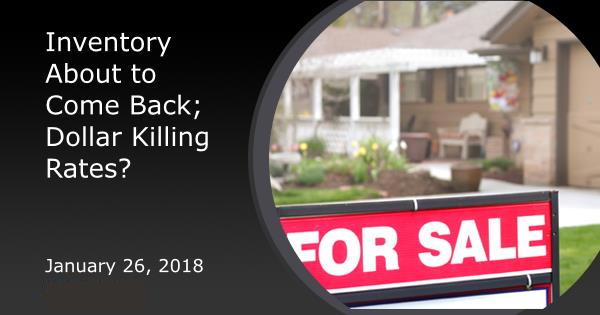 Inventory About to Come Back; Dollar Killing Rates?

Seemingly overnight, financial markets are abuzz over fluctuations in the dollar and the alleged impact that's having on interest rates. We'll discuss those claims in detail, but first, let's dig into this week's home sales data.

Both of the key reports released this week showed sales falling from last month's levels, but still holding in good territory in the bigger picture.  Existing Home Sales ebbed to an annual pace of 5.57 million units from last month's 5.78 million, and New Home Sales fell to a 625k annual pace from 689k last month.  While those sales figures are fairly boring (in a good way), the accompanying inventory numbers are more interesting. 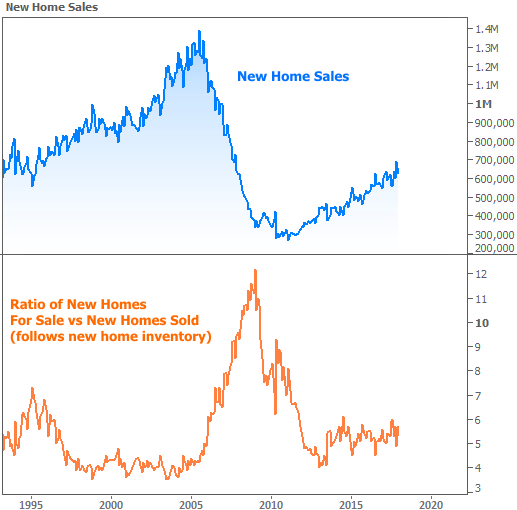 As the chart suggests, there was a lot of new home inventory to work through following the financial crisis.  Once that backlog was cleared, the inventory ratio stabilized  and builders have been ramping up production accordingly.

The situation in Existing Home Sales has been a bigger deal.  While "inventory issues" have been a common refrain in the housing market over the past few years, this week's data showed a drop to a new record low. 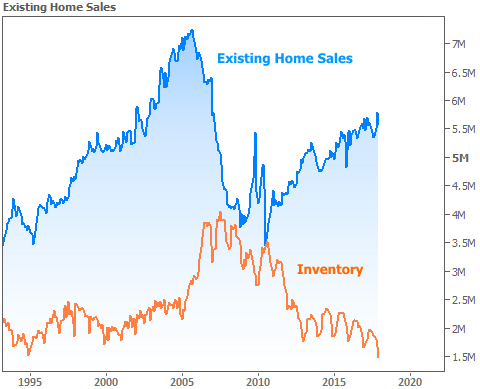 Low inventory is typically characterized as a "bad thing" that holds back home sales growth.  While that's hard to argue, it's more of a backward-looking assessment.  The last time inventories were near current levels was at the end of 1994, just before Existing Sales began the run that would ultimately take them over 5 million units for the first time.  In that sense, 1994's low inventory was definitely not a bad thing.

There is plenty of uncertainty as to whether this instance of low inventory will give way to similar strength in sales over the long run, but in the short term, we know inventory is about to move higher.  The reason is simple: that's just what inventory does heading into a new year.  In the chart above, note the successive bounces along the lows during the past 5 years.  Each of those bounces occurred in Dec/Jan, marking the turning point for a surge into the summer months.

If there's a dark cloud on the inventory horizon, it's the recent rise in mortgage rates.  Not only does this dissuade some homeowners from putting their home up for sale, it also hurts affordability on the demand side of the equation.  Mortgage rates have quickly moved to the highest levels in more than 9 months.  While major media outlets have begun to cover this, the magnitude has been somewhat under-reported due to reliance on Freddie Mac's weekly rate survey (which is accurate over time, but lags on a day-to-day basis). 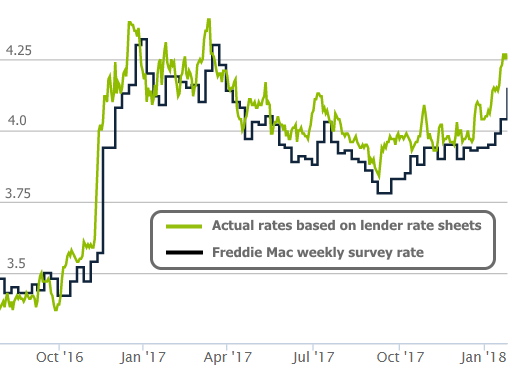 With sharp declines in the dollar happening at the same time, more than a few market participants are mistakenly pinning rate trends on the direction of the dollar.  In their defense, there appeared to be some evidence for that earlier this week.  Had they looked back a few weeks, they'd see most of the recent rate spike occurred while the dollar was trading fairly flat. 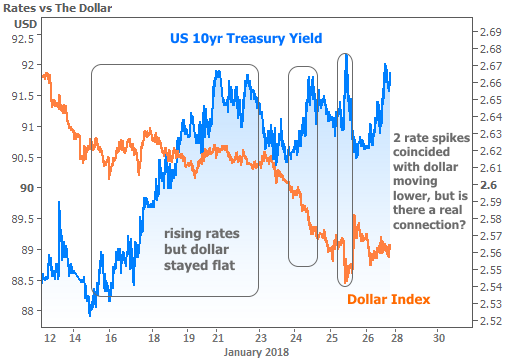 You may well encounter news or conversation that continues making a case for a weak dollar and higher rates, so let's break down what's really going on here.

Both rates and currencies move for a multitude of factors.  Some of those factors are shared, though many are not.  It's when these shared factors are in play that it might seem like the dollar is affecting rates, or vice versa.  Incidentally, I'm NOT saying the dollar has no effect on rates.  It does have SOME--just not nearly as much as some of this week's financial news suggested.

Reporters and traders were understandably tuned in to the dollar given Trump's comments on NAFTA and Treasury Secretary Mnuchin's comments on the dollar itself (which markets took to mean the administration might like the dollar to weaken a bit).  In the bigger picture, however, foreign currency fluctuations are a far bigger deal.

Case in point, the inception of the Euro currency prompted the biggest drop in the dollar since the early 80's.  If you believe this week's news, that should have pushed rates higher.  Instead, they were in the midst of their best move lower since the early 80's!  The financial crisis provided a different example of this week's news being misguided.  There too, the dollar weakened even as rates were falling. 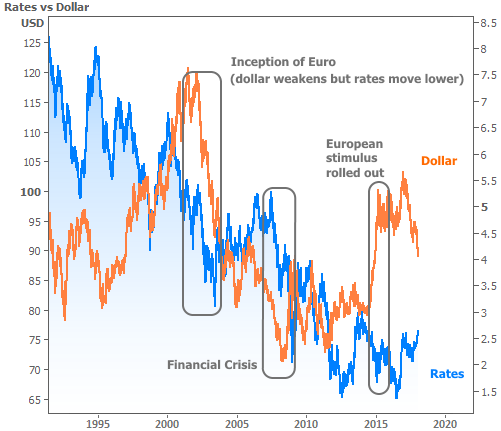 To put the issue to bed, we can look at a close-up view of the end of this week.  The Euro moved higher following European Central Bank (ECB) President Mario Draghi's comments at a press conference on Thursday morning.  Those same comments hurt interest rates for different reasons (investors inferred Draghi would be more willing to stop buying bonds this year because he was saying the economy was doing very well).

Just after that, interest rates managed to find their footing all on their own.  The Euro remained elevated and the dollar (not pictured) remained weaker.  It wasn't until Trump said Mnuchin's dollar comments earlier in the week were taken out of context that the dollar surged and the Euro fell. 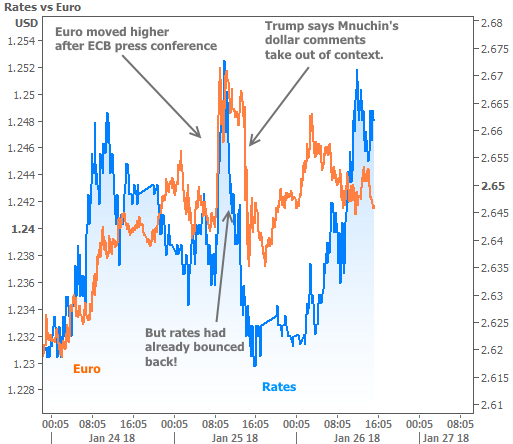 If there was any doubt about that being a fluke, rates rose quickly on Friday while the dollar barely budged.  Bottom line: they each have their own motivations.   Sometimes they overlap, but most of the time, they don't.  It just made convenient news this week.