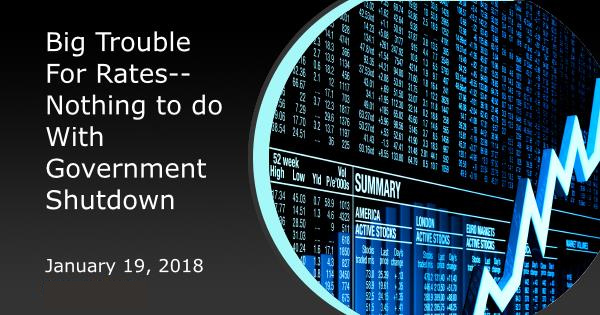 Big Trouble For Rates--Nothing to do With Government Shutdown

Mortgage rates moved higher at their fastest pace since last June this week, and to levels not seen since last March! Underlying bond markets are in big trouble as well with 10yr Treasury yields breaking above 2.64%.

With the big moves in bonds and the prevalence of headlines relating to the government shutdown, one might assume there's a connection.  But the shutdown (and any bill to avert it) is really just a sideshow as far as rates are concerned.  It might get a small reaction in the short-term, but it hasn't been a big picture motivation.

Bigger picture motivations for bonds include the following:

Supply.  Much of the price of anything is dictated by supply and demand.  As the supply of bonds increases, prices go down--in turn, pushing rates higher.  Bond market supply is a concern because the Treasury must issue new bonds to offset the loss of revenue associated with the tax bill (as well as any other increase in government spending).

Corporations are also issuing a lot of debt right now (common both at the start of a new year and when rates look like they might head higher).  That debt competes with Treasuries and Mortgages, thus pushing rates higher for everyone.

Finally, investors are concerned about foreign governments as well as corporations with foreign income selling their holdings of US debt.  These risks were played up in a few news stories this week but they are supporting actors, at best.

Central Bank Policy.  This one's a biggie.  We're talking about the likes of the Fed, The European Central Bank (ECB) and the Bank of Japan (BOJ).  All of the above are buying massive amounts of bonds in one form or another.  While investors assume the central banks would like to get out of the bond-buying game at some point, the timing and nature of such an exit is always a matter of debate.

Central bankers have increasingly hinted at sticking to more aggressive outlines for decreased bond buying.  Just this week, San Francisco Fed President John Williams (potentially flagged to be the next Vice Chair at the Fed) said the global economy is shifting from a period of headwinds to tailwinds.  That implies central banks will need to "remove accommodation" to keep growth from overheating.  "Removing accommodation" is synonymous with "higher rates."

Technicals and Positioning. These two esoteric terms have little meaning for the average consumer, but they're important to financial market participants.

"Positioning" refers to trading positions--essentially "bets" on what will happen in the future.  If too many traders hold one position, there is opportunity in taking an opposite position.  One of 2017's most popular trading positions helped rates remain relatively lower and we're quickly seeing a reversal of that positioning in 2018.

"Technicals" refers to technical analysis.  In not so many words, this is the practice of analyzing and making predictions about market movement based solely on math and observation applied to the market in question.

In other words, because 10yr Treasury yields bounced around 2.64% twice about a year ago, this week's break above 2.64% is important.  This is a thought process that exists completely independently of anything else going on in the world or other markets.  It's not the only strategy traders employ, but it's a factor, to be sure.

Motivations aside, let's look at the fallout.  Things are worse than you may have heard, depending on where you get your news.  If a person were to search online for "mortgage rates," there's a decent chance that one of the first news stories would have been based on Freddie Mac's weekly rate survey.

While Freddie's numbers are a good way for someone to track general, long-term trends in mortgage rates, they're not the best resource for people with an active interest in current mortgage rates.  Freddie's survey can lag quicker market movements somewhat significantly.  This issue is most noticeable on weeks where a majority of the bond market movement occurs Wednesday through Friday (which was the case this week).

As a result, Freddie suggests a mild increase from last week's survey.  If they could update it for the past 3 days, it would likely show 2-3 times as much movement.  Most mortgage borrowers can count on Friday's rate quotes being at least an eighth of a percentage point higher than those from Tuesday morning (conventional 30yr fixed).  Other loan products have seen some even bigger swings. 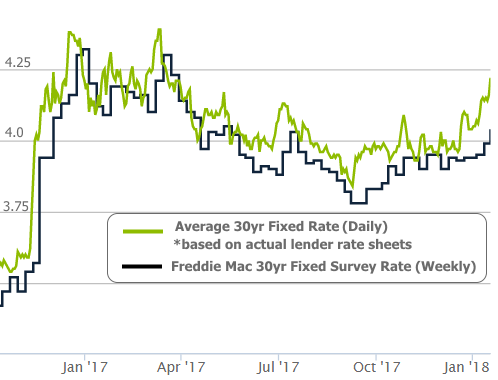 The chart above suggests that the sky may not have fallen as far as mortgage rates are concerned.  After all, they have some room to run before breaking above the highs seen earlier this year.  While that's indeed true, mortgage rate momentum is heavily dependent on broader bond market momentum.  In that regard, the 10yr Treasury yield is the quintessential yardstick.  Unfortunately, that long-term chart has already run out of room. 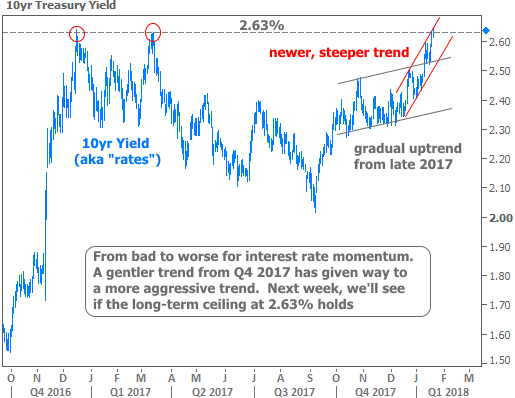 The most recent uptrend in rates has a lot of pundits proclaiming a "bear market" for bonds.  More specifically, they say this is the end of the decades-long bull market in bonds.  Are they right?

As long as you agree that rates probably won't go perpetually lower (i.e. even though some lending rates dipped into negative territory overseas in recent years, there was a lower bound that was just below 0%), you will have a big leg up on anyone who asks you "is it over?"

Because rates can't go lower forever, the long-term bull market was always destined to come to an end.  A much better question is "how will it end?"  Will rates trickle sideways in the bigger picture?  Will they find some reason to continue lower by the end of this year?  Or will the most dire predictions come true with a sharper move higher?  All of those hypothetical scenarios are seen in the dotted lines in the following chart (sooner, later, much later). 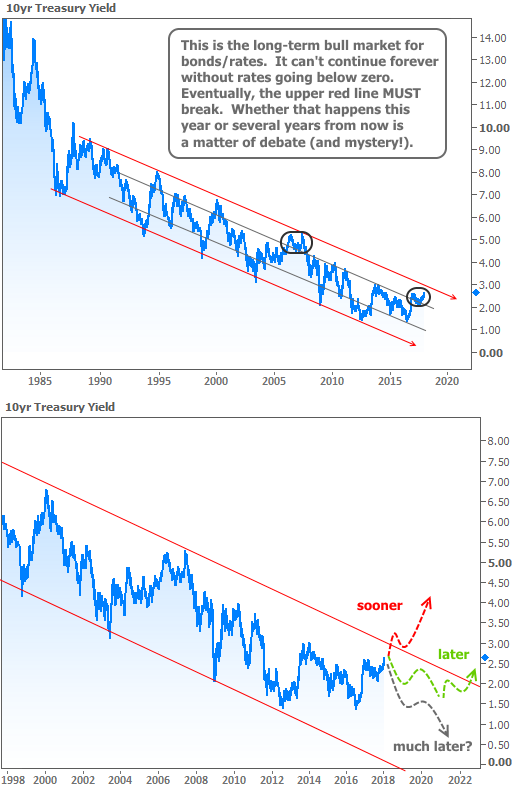 All three possibilities remain in play, although in terms of short-term strategy, it makes a lot of sense to remain defensive (i.e. on guard against rates moving even higher) until the market shows us that buyers have regained control.  We know they're out there, but no one wants to be the first one back in the water just because a bunch of other people want to swim too.  It's important to make sure the sharks have left.

Away from the drama of interest rates this week, there were 2 major housing-related economic reports.  Both were generally uneventful!

The Census Bureau reported a slightly bigger-than-expected decrease in Housing Starts, but that was offset by Building Permits beating forecasts to hold steady at long-term highs.

The NAHB reported a drop in Homebuilder Confidence, but it was right in line with the median economist forecast, not to mention still very close to last month's 19-year high. 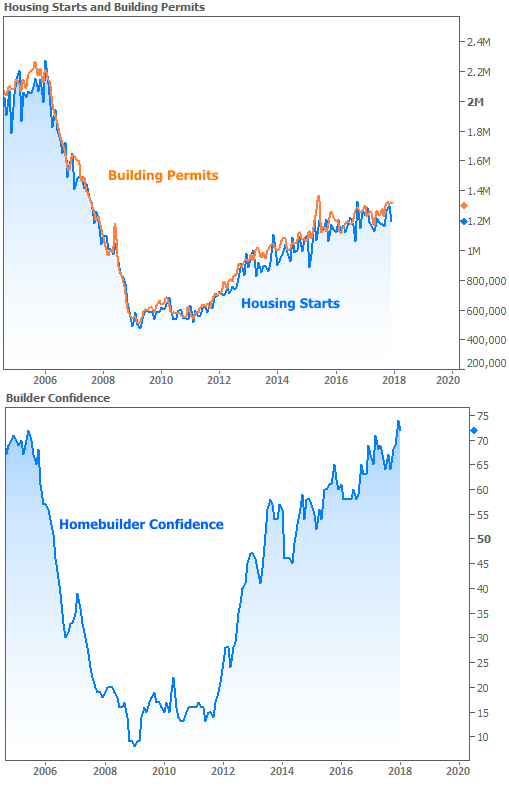