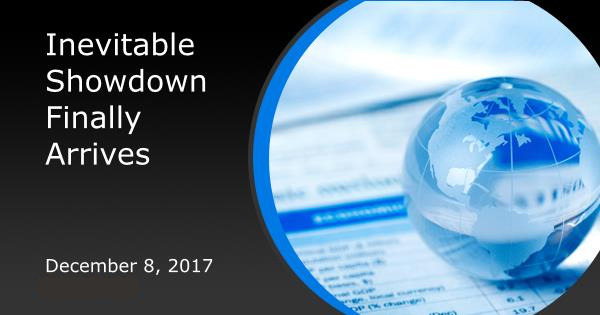 In the wee hours of the morning following election day last year, markets were in a state of complete disarray--especially bond markets (which dictate rates). After a significant improvement initially, rates embarked on their single worst trading day since the 2013 taper tantrum. Did they know something back then about where we'd end up today?

Markets knew exactly how Clinton would have governed, but Trump's likely policy path had to be extrapolated from plausible campaign promises, past precedent in the business world, and perhaps an episode or two of the Apprentice. Point being, markets had to have some dialogue and debate about what was likely to happen under the Trump administration.

The GOP sweep of the House and Senate was a wild card that kicked the dialogue into high gear. Light bulbs began going off in traders' minds, illuminating things like protectionist trade policies, hefty tax cuts, increased infrastructure spending, abandonment of the Fannie/Freddie conservatorship, the potential repeal of Dodd Frank, a dismantling of the Affordable Care Act, and a muzzling of the CFPB.

It's astonishing just how accurate the market's speculation turned out to be.  Here we are just over a year later, staring down the barrel of several of the biggest risks outlined in the excerpt.  To be clear, the "big two" are the tax cuts and the infrastructure spending.

As of this week, the Senate and the House have moved into "conference" in order to reconcile their respective versions of the tax bill (both have passed, but now they have to agree on a final version).  In separate news, Trump said he'd announce an infrastructure spending plan in January 2018.

While we don't know what the reconciled version of the tax bill will look like yet, we can be 100% sure that it will increase the deficit (same story for infrastructure spending, but we'll cross that bridge in January if and when we come to it).  Increasing the deficit means the government either needs to collect more revenue or borrow more money.

Revenue can increase if taxes increase, or if taxpayers earn more money (same tax rate + more income = more revenue for Uncle Sam).  On average, revenues certainly aren't increasing as a result of the tax bill, so additional revenue would have to come from increased growth or increased government borrowing.

Even the most optimistic non-partisan estimates suggest that revenue growth won't offset even half the cost of the tax bill.  That leaves hundreds of billions of dollars in increased borrowing needs for the government, and that's before broaching the topic of an infrastructure spending plan.

The government borrows money primarily through the issuance of Treasuries: government bonds purchased by institutions, foreign governments, day traders, money managers, pension funds, and even old Grandma Dorothy who gave me that funky-looking check thingy when I was 8 years old.

If the supply of those bonds rises relative to demand, interest rates in the US move higher.  Moreover, if the policies in question help the economy, inflation could increase.  Rising inflation makes Grandma Dorothy's savings bond worth a lot less as the years go by, so investors tend to ditch those if inflation picks up.

Back in 2016, traders didn't have to be clairvoyant to see that increased bond market supply was likely.  The associated inflation risks only strengthened the case for bond traders to sell first and ask questions later.  That's exactly what we saw in late 2016 and exactly why we saw it.  It also helps explain why bonds jumped much more noticeably than stocks.

The silver lining here is that rates got a lot of the pain associated with the tax bill out of the way a year ago, simply by hedging their bets against reasonable legislative probabilities.  Case in point, the materialization of the tax bill in recent months only created a moderate rise in rates (red circle in the chart below).  Notably, the overall trend since the beginning of the year is still arguably "sideways to slightly lower (blue dotted lines). 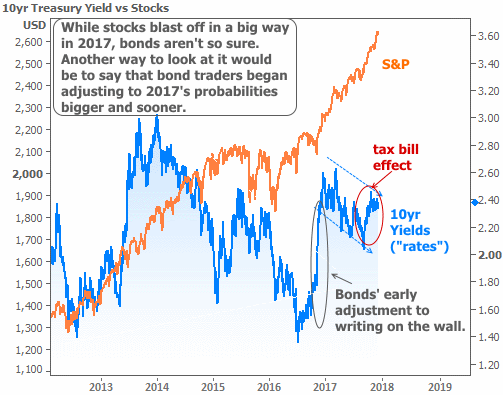 While it's possible that rates have some more rising to do in the event the tax bill is passed, I'd argue  bond markets have already mostly adjusted.  It will take other developments to fully shape near term rate momentum.

Two of those developments arrive next week in the form of monetary policy announcements from the Fed and the European Central Bank.  Whereas government spending pushes rates higher by increasing the supply of debt, the Fed moves rates by "deciding" where short-term rates need to be in order to balance growth and inflation.  They then buy/sell accordingly, thus forcing rates to their preferred level.

We can already be 100% certain that the Fed will hike rates again next week.  Put another way, if rates are moving higher next week, it WON'T be because the Fed hiked its policy rate.  But the Fed also releases important information 4 times a year that helps market participants gauge the future path of rates. Next Wednesday is one of those 4 times.

The European Central Bank (ECB) will follow on Thursday with its own policy announcement.  Their course is fairly well set for now as they've already announced a 50% decrease in bond purchases in the first 3 quarters of 2018.  Traders will nonetheless be looking for clues about how the ECB will handle certain problems that might arise during that time.

With the central bank announcements, a potential finish line in sight for the tax bill, and important inflation data to be reported, next week could see big moves in rates.  One mitigating factor is that mortgage rates haven't been quite as volatile as 10yr Treasury yields (the best benchmark for following mortgage rate momentum).  That said, if Treasuries break above certain ceilings (like 2.42%), mortgage rates will be forced to follow--reluctant though they may be.