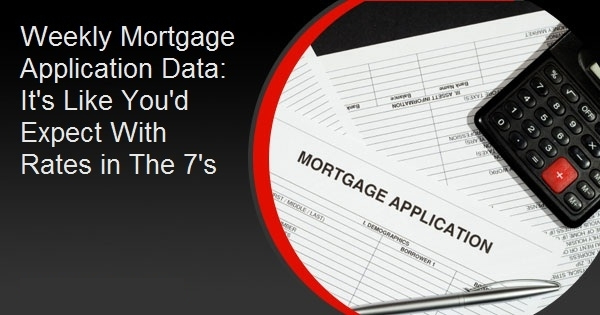 Weekly Mortgage Application Data: It's Like You'd Expect With Rates in The 7's

There was a slight increase in refinancing during the week ended October 21, but overall mortgage applications fell for the fifth straight week. The Mortgage Bankers Association (MBA) said its Market Composite Index, a measure of mortgage loan application volume, decreased 1.7 percent on a seasonally adjusted basis from one week earlier and was down 2 percent on an unadjusted basis.

The seasonally adjusted Purchase Index drifted down another 2 percent and was 3 percent lower before adjustment. This put the purchase application volume 42 percent below its level at the same point in 2021.

The Refinance Index rose 0.1 percent week-over-week and was 86 percent lower than the same week one year ago. The share of the week’s applications that were for refinancing ticked up to 28.8 percent from 28.3 percent the previous week.

“Mortgage rates increased for the 10th consecutive week, with the 30-year fixed rate reaching 7.16 percent, the highest rate since 2001. The ongoing trend of rising mortgage rates continues to depress mortgage application activity, which remained at its slowest pace since 1997,” said Joel Kan, MBA’s Vice President and Deputy Chief Economist. “Refinance applications were essentially unchanged, but purchase applications declined 2 percent to the slowest pace since 2015 – over 40 percent behind last year’s pace. Despite higher rates and lower overall application activity, there was a slight increase in FHA purchase applications, as FHA rates remained lower than conventional loan rates.”

MBA’s economic forecast for the coming year was released earlier this week and Kan referenced its prediction that both economic and housing market weakness in 2023 will “drive a 3 percent decline in purchase originations, while refinance volume is anticipated to decline by 24 percent.”