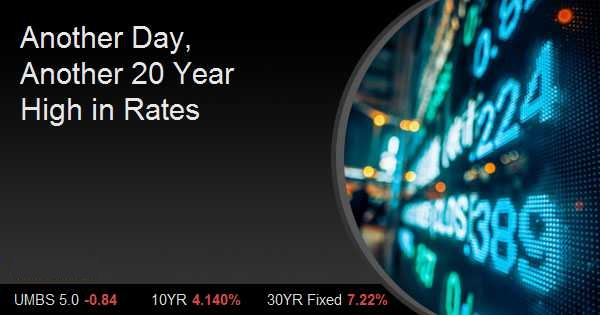 Sifting Through Ashes For Seeds Of Hope

There's no way to sugarcoat the situation in the bond market and, by extension, the mortgage and housing markets. Rates have risen at a nearly unprecedented pace, ushering in one of the quickest cooldowns on record. One of the only ways to find hope in this environment is to imagine that bad news is finite.

To be clear, "bad news" is relative, because it has been the resilience of the domestic economy that has allowed rates to rise as aggressively as they have so far.  This isn't necessarily a direct relationship, but the Fed is looking for a few pieces of evidence that its unfriendly policies are having the desired effect, and one of those pieces would be rising unemployment.

So far, unemployment has remained low, inflation has remained high, and the Fed has remained very unfriendly toward rates.  They've been so unfriendly that market participants have increasingly wondered how much they can get away with before signs of uncommon stress show up in rate markets and elsewhere.

In the 2nd half of the week short term yields moved higher, faster at first.  When shorter-term yields are rising faster in 2022, it often goes hand in hand with the perception that the Fed will be hiking its Fed Funds Rate faster.  To illustrate this point, here's a quick look at the relative movement in 2yr Treasury yields and Fed Funds Rate predictions for September 2023.

After short term rates spiked, longer-term rates paradoxically began to spike more.  This was most noticeable on Thursday and again on Friday morning.

This is uncommon behavior in 2022!  It suggests some resistance on the part of market participants that the Fed will be able to get away with a much higher rate hike trajectory.  At the same time, longer term rates moved higher in protest of the Fed's persistent unwillingness to admit that its unfriendly policies have already begun to work their way through the system even if they're not seeing it in their preferred economic reports.

By the 8am hour on Friday, the bond market was arguably breaking down into a somewhat panicked state.  Yields (a fancy word for "rates") hit the highest levels in over a decade and volatility remained high until a WSJ article came out suggesting the Fed would be debating the size of future rate hikes at the coming meeting.  Moments later, big trades hit Fed Funds Futures (the securities that allow traders to bet on the Fed Funds Rate in the months ahead).  Less than 1 minute later and traders were pushing longer-term rates back down.

The following chart is a bit busy, but it shows all of the above.  The orange line is the expected Fed Funds Rate after the Fed's December meeting based on Fed Funds Futures.  The blue line is the 10yr Treasury yield, the most widely accepted benchmark for longer-term rates in the US.  Trading volume for each line appears in the lower section with Fed Funds Futures volume spiking shortly before Treasuries.

All that to say the market was ready for any indication that the Fed is getting close to leveling off the pace of its rate hikes.  A short while later, such notions were forcefully validated by actual comments from the Fed's Mary Daly, who said several things that markets had been waiting to hear.  The following bullet points paraphrase those comments:

All of the above is very important because it suggests the sentiment exists among Fed members to begin to consider a rate-friendly shift in monetary policy.  To be sure, this by no means suggests and easy victory or quick return to lower rates.  It also wouldn't lessen the importance of economic data in confirming that inflation isn't getting any higher.  But it's one small step in the right direction--one small seed of hope in the ashes of the housing and mortgage market in the 2nd half of 2022.

Is this imagery overly dramatic?  It depends on one's perspective.  Few would disagree that home price gains were sustainable or that the industry didn't need to cool off a bit.  But it would be similarly hard to disagree that pace of change in rates and sales has been more abrupt than would be ideal.  Unfortunately, when an industry is heavily dependent on the one thing the Federal Reserve uses to fight inflation, things are going to get bumpy when inflation is at its highest levels in decades.  Here's the latest damage from some of this week's economic data:

Existing Sales, as reported by the National Association of Realtors didn't fall too much from the previous month, and they were fairly close to forecast levels, but those forecast levels were 2 million homes below the recent peak in terms of annual pace.

The 6 month outlook fell even more, which is notable because it almost always runs higher than the overall builder confidence index.  The following chart compares the 6 month outlook to the headline number.  This simply speaks to the pervasive fear among builders that things will get even worse from here.

Notably, the data was not collected until the mid 80s, and it's possible if not likely that a similar pattern would have emerged in the early 80s, the last time interest rates rose at such a pace.   Speaking of rates, multiple news outlets missed the mark again this week due to their reliance on stale weekly survey data.  Actual, up-to-date numbers suggest an average 30yr fixed rate well into the 7% range.

The coming week has several somewhat relevant economic reports, but it's more of a placeholder.  The following week will be exceptionally important as it brings the much-anticipated Fed announcement as well as the next installment of the jobs report. The week after that is also critically important due to the November 10th release of the next Consumer Price Index (CPI), the inflation report that has done more than any other report to shape rate movement in recent months.