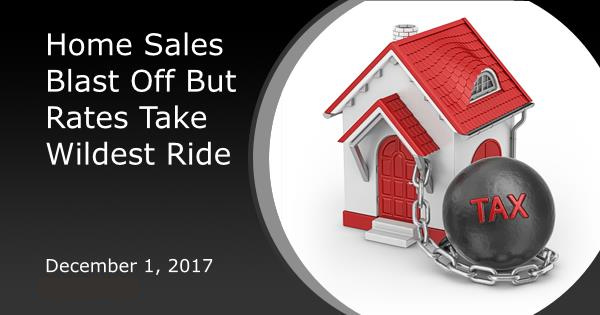 The last newsletter discussed how the Senate's tax bill had moved through committee and possibly toward a full vote this week.  Tax reform is a big deal for markets, so it was no surprise to see stocks and bonds (which underlie mortgage rates) hold steady on Monday as they waited for updates.

This left the week's early spotlight on New Home Sales, which increased at the fastest pace in a decade!  The news was well-received considering the previous report was strong enough to raise doubts about the overall trend (New Home Sales data is historically more volatile than other home sales data).

Revisions to the last report turned out to be minimal.  Moreover, the new report trounced expectations for a 6 percent decline, instead rising by 6.2 percent.  While this doesn't bring us back to the previous peaks (some would argue those weren't healthy anyway), there's no question that the trajectory looks great. 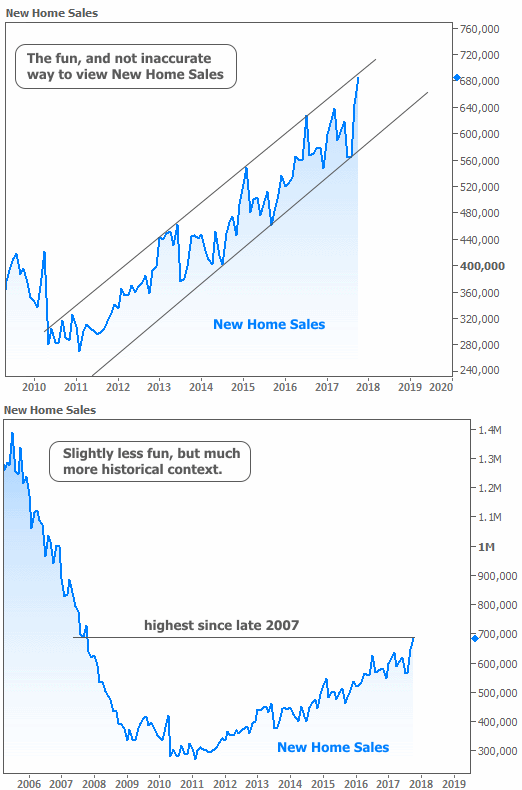 As the week progressed, markets stole the show from economic data as they reacted to political headlines.  Most of the headlines regarding tax reform were within the realm of expectations.  We knew the Senate would be trying to tweak the bill in order to gain enough support from GOP holdouts to get the 51 requisite votes.  They were ultimately successful.

Stocks and rates rose throughout the week as the tax bill's chances of survival improved.  Some mainstream media outlets reported LOWER mortgage rates, but they should be ignored.  The stories in question are based on stale survey data that hadn't yet caught up to the mid-week volatility.  Mortgage rates actually hit 1-month highs on Thursday.

This particular move higher was bad news for fans of low rates, because it suggested an important shift in the recent trend.  The trend in question consisted of an increasingly narrow range leading into this week.  When such ranges are broken, there tends to be extra momentum in the direction of the break.  It would have taken a massively important and unexpected development to counteract the negative implications.

As luck would have it, that's exactly what happened on Friday!  Federal prosecutors reported that former National Security Advisor Flynn pleaded guilty to perjury regarding his communications with Russia.  More importantly, Flynn struck a plea deal for reduced charges.

Markets were left to imagine the plea was likely in exchange for information that could incriminate other members of the administration.  If Trump ends up on that list, it'll make today look like a picnic.  The simple possibility of such an event was enough for stocks to instantly erase the week's gains and for rising rates to catch a break. 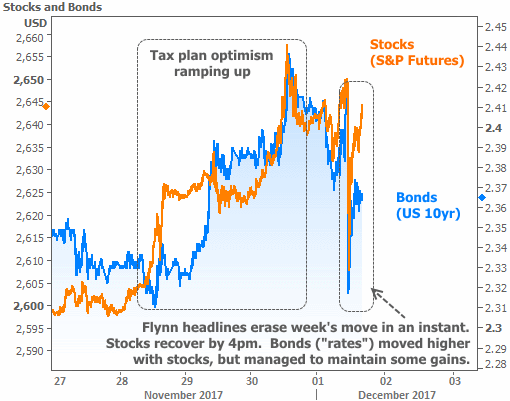 The decline in bond yields brought rates back into that "narrower range" as seen in the following chart, but only for a few hours.  With more clarity on the Flynn news (i.e. no specific mention of Trump), stocks and rates eased back toward the morning's levels.  Rates remained in better shape on the day, but still on the wrong side of the red lines. 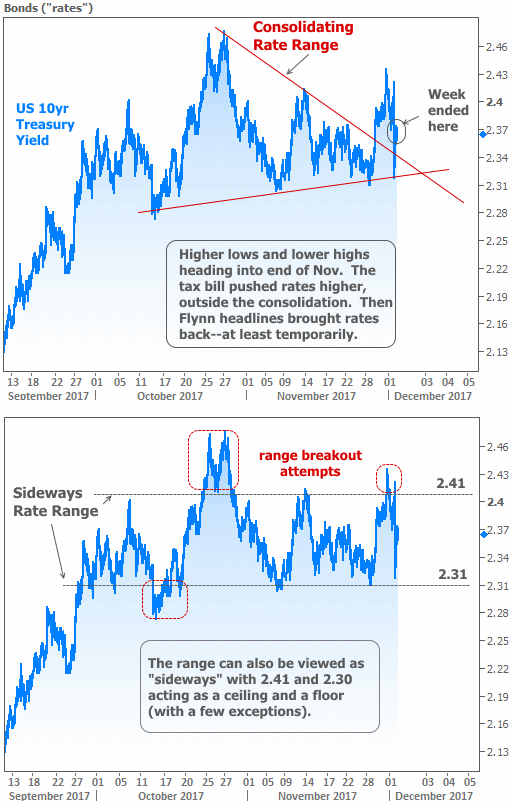 While the chart above presents rates in terms of 10yr Treasury yields, the implications are the same for mortgage rates.  If Treasuries manage to stay below the 2.41% ceiling, mortgage rates will be happy to continue operating near current levels.  But if Treasuries break much higher, conforming mortgage rates could quickly move back to October's highs.

Whereas conforming mortgage rates may be in a bit of trouble, there's unequivocally good news for conforming mortgage loan limits.  FHFA, which oversees Fannie and Freddie, announced a loan limit increase to $453,100 from the current $424,100.  Limits are even higher in certain high-cost areas and for multi-unit dwellings.