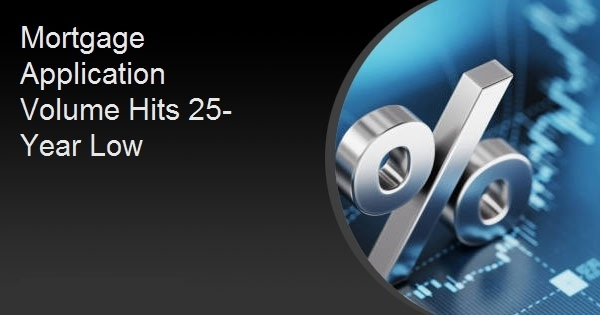 Mortgage application activity fell again during the week ended October 14 as mortgage interest rates hit their highest level in 20 years. The Market Bankers Association (MBA) said its Market Composite Index, a measure of mortgage loan application volume, decreased 4.5 percent on a seasonally adjusted basis from one week earlier and was down 4 percent on an unadjusted basis.

The Refinance Index dropped 7 percent week-over-week and was 86 percent lower than the same week in 2021. The refinance share of mortgage activity decreased to 28.3 percent of total applications from 29.0 percent during the week ended October 7.

The seasonally adjusted Purchase Index was down by 4 percent from one week earlier and was 3 percent lower before adjustment. Purchase volume was 38 percent lower than the same week one year ago.

“Mortgage applications are now into their fourth month of declines, dropping to the lowest level since 1997, as the 30-year fixed mortgage rate hit 6.94 percent – the highest level since 2002,” said Joel Kan, MBA’s Vice President, and Deputy Chief Economist. “The speed and level to which rates have climbed this year have greatly reduced refinance activity and exacerbated existing affordability challenges in the purchase market. Residential housing activity ranging from new housing starts to home sales have been on downward trends coinciding with the rise in rates. The current 30-year fixed rate is now well over three percentage points higher than a year ago, and both purchase and refinance applications were down 38 percent and 86 percent over the year, respectively.”