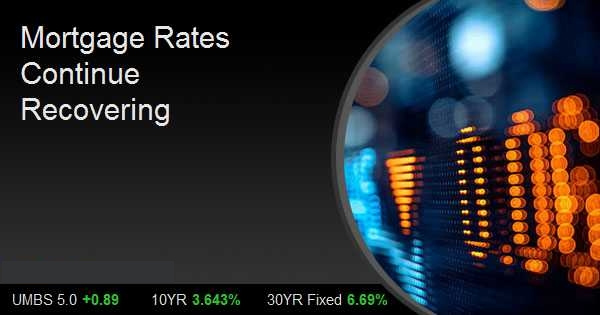 Mortgage rates remain elevated in the context of the past decade and 2022 in general, but they continue making progress after hitting long-term highs early last week.

While the general presence of high rates is due to inflation and resilient economic data, the highest highs were primarily a byproduct of a fiscal policy announcement in The UK.  Those policies were finally walked back in comments from UK officials early this morning.  Financial markets including the bond market (which dictates rates) cheered the news, with yields/rates dropping steadily by the time domestic trading was underway.

Then at 10am, an important manufacturing report in the US showed a moderate contraction in the sector.  In addition to lower manufacturing activity, the indices tracking employment and prices also declined.  Economic contraction is the 2nd best thing that could happen for interest rates, right behind a massive, sustained drop in inflation.  As such, bonds cheered that news as well with many mortgage lenders updating rate offerings with slightly more favorable terms.

The average lender is now getting back into the middle to upper-middle 6% range depending on the scenario and the presence of "points" in the loan quote.  Economic data should continue to play a role in this week's rate momentum, with other significant reports set to come out on Wednesday and Friday.