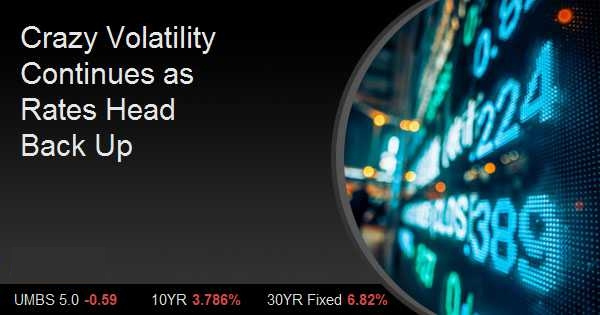 Crazy Volatility Continues as Rates Head Back Up

"The following information is deemed reliable only through September 29th, 2022.  After that, rates could be as much as .25-.50% higher or lower. "

Every daily rate update needs to come with that sort of disclaimer these days.  We've been seeing some of the biggest day-to-day changes (and intraday changes) since our daily record keeping began in 2009.  The past 3 days have been right up there with a spike of more than 0.20% on Tuesday, a drop of more than 0.40% yesterday (in two phases), and a spike of almost 0.20% today.

Most of the recent volatility is a factor of market panic that began in the UK late last week.  The initial reaction was a fast move toward higher rates, but when the Bank of England (The UK's version of the Fed) made an emergency announcement yesterday, rates plummeted... temporarily.

Today then became a day for the underlying bond market to find it's new trading range.  The Bank of England helped imply a ceiling at Tuesday's highs (when mortgage rates crested 7%).  Now today, inflation data from Germany helped imply a floor at roughly 6.625% (in terms of the average 30yr fixed rate for mortgages in the US).  These aren't hard and fast boundaries.  They could be challenged at any time depending on the data or event that catches the market's attention.

In the coming week, those events are more likely to be tied to US economic data as several big-ticket reports come out.  Volatility potential will be especially high on  October 13th when the next Consumer Price Index (CPI) is released.

A few things to keep in mind between now and then:

1. There's no way to reliably predict which direction we'll go.  It's easier to say that volatility should continue, for better or worse.  And it's probably fair to say that rates would struggle to move any lower than the 6's without serious motivation from data (data that likely would take several weeks, if not months, to arrive)

2. It continues to be the case many quotes imply higher upfront costs than normal (aka "points"). In many cases, several points may be required upfront on certain types of transactions.  This isn't historically the case, and it won't be the case forever this time, but the thing that makes it go away is simply the acclimatization process to higher note rates.  In other words, you'll be able to choose 6.625% with 1-2 points, or 7.125+ with zero points at some point in the near future (assuming today's rates remained relatively unchanged, or at least passed back through this territory amid other volatility).