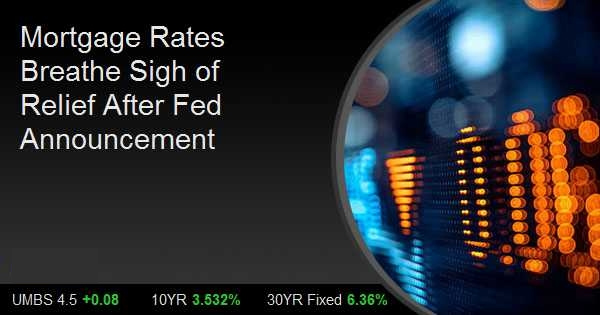 The Fed hiked rates today by 0.75%, and mortgage rates moved lower.  If you don't understand how those two things can happen on the same day, read this morning's refresher here: No, The Fed Hike Doesn't Mean Anything For Mortgage Rates.

The underlying bond market (which dictates rates) was mixed.  In this case, that means longer term bonds actually suggested slightly lower rates while shorter term bonds moved higher in yield due to the Fed's message (primarily, the rate hike outlook that showed how high Fed members think rates will need to go in the coming years).

Mortgage rates aren't quite as "long-term" as a 10yr Treasury yield.  Odd statement, I know, because it's usually a 30yr mortgage right?  But people don't usually keep them for 30 years, so the duration from an investor's standpoint is more like the average life span of the average mortgage, which varies from 3-8 years depending on the market environment.

All that to say, mortgage-backed debt is long enough in duration to have benefited along with the longer end of the Treasury curve (i.e. 7yr, 10yr, 30yr bonds).  Mortgages also benefited from the fact that investors were highly defensive heading into today and thus had some cushion to give back on mortgage rate sheets.

That might sound better than it actually is.  Rates are still very close to the highest levels in 14 years--just not quite as high as they were yesterday.