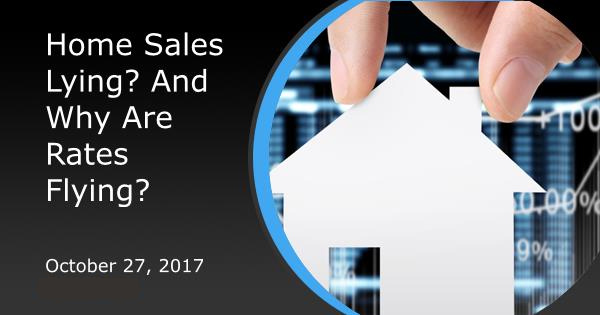 Home Sales Lying? And Why Are Rates Flying?

There was a striking disparity in two separate reports on home sales this week. According to one, things are great and look to be firing on all cylinders. According to the other, things are "less upbeat" to put it mildly. Which one is telling the truth?

First the good news: New Home Sales surged well into their best levels since before the Financial Crisis.  Not only that, but the trend has been linear and positive without fail since 2010.

Unlike New Home Sales, the NAR's Pending Sales Index tracks home purchase contract activity.  This means it tends to run a month ahead of actual sales reports, but more importantly (for the sake of this comparison), that it includes EXISTING homes (resales).  Here we see some signs for concern, with the index matching its weakest reading in more than 2 years.

The disparity between the two reports can be reconciled in a few ways.  Most obviously, we're simply dealing with two different paces of recovery relative to 2005's peak.  New Home Sales were much slower to rebound, and now have more room to run.  In terms of the weakness seen in Pending Home Sales, the NAR cites inventory as the biggest ongoing issue, but also notes hurricane-related distortions are still playing out.

Whether or not the plateau in Pending Home Sales is a harbinger of a housing market slowdown remains to be seen.  The NAR is clear in pointing out high levels of demand among buyers.  It's just that many of those buyers aren't able to find or to secure a contract on the homes they want given the stiff competition and affordability constraints.

For the most part, mortgage rates are doing their part to help the affordability equation.  Rates remain historically low, but they've been under pressure in recent weeks.  Key considerations have been the possibility of tax reform (which rates don't seem to like), and the uncertainty surrounding the nomination of a new Chairperson for the Fed (which rates may like or dislike, depending on the final choice).

The Fed Chair (a role currently filled by Janet Yellen) is perhaps the most important person in the world when it comes to interest rate movement. While the Fed will ultimately be forced to adapt its rate policy to economic conditions, so many of the ups and downs we experience along the way are driven by the Fed's decisions.  The Chair has a disproportionate amount of control over those decisions. In short, don't think of the Fed as a "jury" of equals. The table is anything but round, and "The Chair" clearly sits at the head.

Trump has indicated he will announce his Fed Chair nomination by the end of next week.  But rumors are already flying fairly regularly.  The latest arrived on Friday morning, suggesting Trump favored Jerome Powell (an existing Fed member who is seen as being more like Yellen) over the other frontrunner, economist John Taylor.

It's easy to see just how much markets care about the decision based on their reaction.  Both stocks and bonds prefer Powell in a major way. 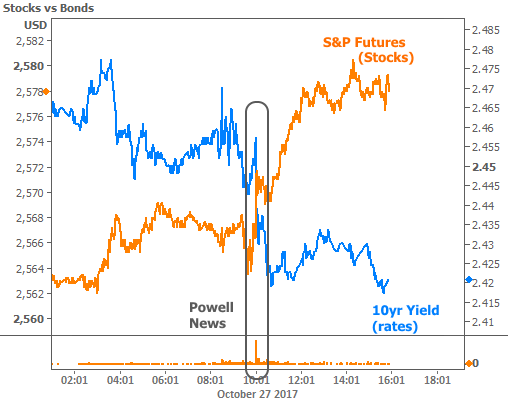 Despite Friday's bond market improvements, rates remain elevated compared to the past few weeks.  In terms of 10yr yields, the risk is that we've broken above a key ceiling at 2.42%, and might have a hard time making a convincing move back below. 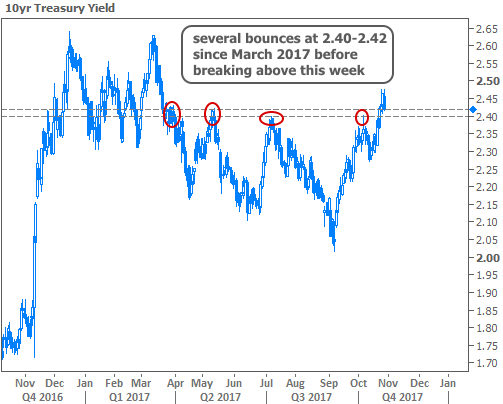 Mortgage rates are faring slightly better and have yet to rise above summertime highs.  That said, this week was worse than most major media outlets are reporting due to overreliance on Freddie Mac's weekly survey-based rate data (which can lag actual lenders' rate sheets when markets are volatile). 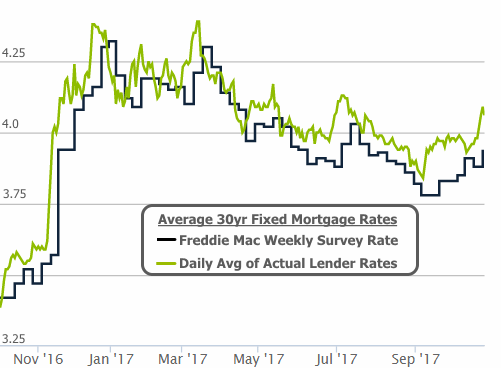 Expect infinitely more clarity on the rate situation next week when we get the final word (hopefully) from Trump himself.