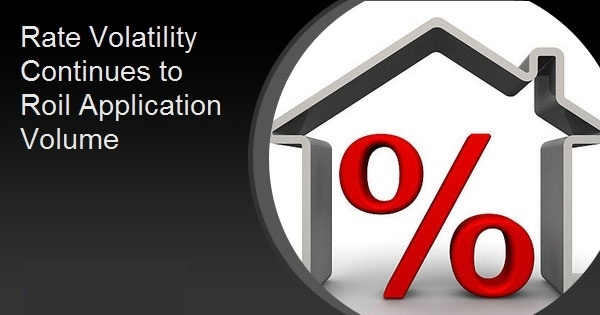 The volume of mortgage applications fell again last week, dragged lower by refinancing which had its largest week-over-week decline since mid-May. The Mortgage Bankers Association (MBA) said its Market Composite Index, a measure of that volume, decreased 3.7 percent on a seasonally adjusted basis from one week earlier. On an unadjusted basis, the Index fell 5 percent.

The Refinance Index plunged by 8 percent and was 83 percent lower than the same week one year ago. The refinance share of mortgage activity decreased to 30.3 percent of total applications from 31.1 percent the previous week.

The seasonally adjusted Purchase Index decreased 2 percent and the unadjusted version was down 4 percent from the prior week. That index was 23 percent below its level during the same week in 2021.

“Mortgage rates have been volatile over the past month,” he said, “bouncing between 5.4 percent and 5.8 percent. In another sign that market volatility has picked up, the average rate on a jumbo loan was 5.32 percent, 48 basis points lower than for a conforming loan. This spread reached a high of over 50 basis points in July – and had narrowed – before now widening again.”

Added Kan, “Application volume dropped and remained at a multi-decade low last week, led by an 8 percent decline in refinance applications, which now make up only 30 percent of all applications. Purchase applications have declined in eight of the last nine weeks, as demand continues to shrink due to higher rates and a weaker economic outlook. However, rising inventories and slower home-price growth could potentially bring some buyers back into the market later this year.”

Other findings from MBA’s Weekly Mortgage Applications Survey for the week ended August 26: