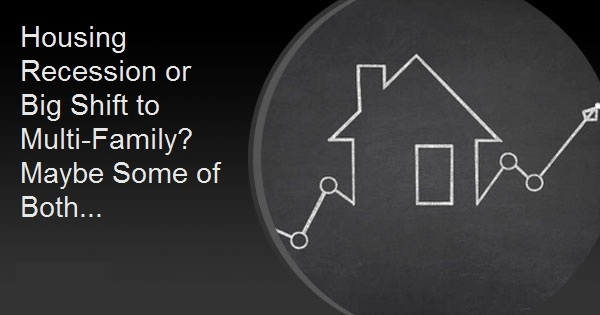 Housing Recession or Big Shift to Multi-Family? Maybe Some of Both...

Residential construction numbers fell again in July, giving credence to Monday’s National Association of Home Builders’ (NAHB’s) report detailing a near ten-year low in builder enthusiasm about the new home market. The U.S. Census Bureau and Department of Housing and Urban Development said both the rate of permitting and construction starts fell from their June levels.

Permits for residential construction were down 1.3 percent compared to the previous month at a seasonally adjusted annual rate of 1.674 million units. The June estimate was upgraded from 1.685 million to 1.696 million units. Permitted was 1.1 percent higher than in July 2021.

Single family permits came in below the 1-million-unit rate for the second straight month at 928,000 annual units, 4.3 percent lower than in June. The permitting rate for those units is now 11.7 percent lower year-over-year. Multifamily permits were 2.5 percent higher than the prior month at 693,000, which is a 26.2 percent annual increase.

Housing starts slowed to a rate of 1.446 million in July, down 9.6 percent from June’s upwardly revised rate of 1.599 million and an 8.1 percent decline from the prior July. Single family starts fell 10.1 percent in a month and 18.5 percent on an annual basis. Multifamily starts completed the sweep, falling 10.0 percent although they were 17.4 percent higher year-over-year.

Analysts for both Trading Economics and Econoday had expected permits for July to be at 1.65 million. The consensus for construction starts was 1.54 million in both cases.

NAHB chief economist Robert Dietz declared that “a housing recession is underway,” citing an eight-month slide in builder sentiment and a five-month decline in single-family construction. The latter is, he said, “another indicator that the housing slowdown is showing no signs of abating, as rising construction costs, elevated mortgage rates and supply chain disruptions continue to act as a drag on the market.

The number of completed housing units YTD edged up by 0.6 percent over last year to 775,300 and single-family completions increased by 4.6 percent to 572,300. YTD completions of units in buildings with five or more is down 9.7 percent from last year to 198,100.

In the category of "not good, not bad, just interesting," is the persistently split personality between single and multi-family construction.  There are a handful of staggering statistics, but one of the most telling is the 26.2% year-over-year increase in multi-family permits versus the 11.7% decline in single-family permits (a vast majority--more than 90%--of multi fam permits are for 5 or more units). Single fam permits are still higher, but the gap is getting very narrow.

Looking back, we see that it's not too abnormal for single and multi-fam permits to be fairly close to one another.  The 1990s and 2000s were the big exceptions.

If there's so much multi-fam housing, why is the rent too damn high? Keep in mind that the chart above shows permits.  If we use the always awesome FRED site to chart 5-unit completions vs single-fam, we see both bouncing back after the financial crisis, but whereas single fam completions have improved at a relatively steady pace, multi-fam peaked in late 2016 and have been broadly sideways ever since.

In other words, there's a backlog of multi-fam units waiting to hit the market--a factor that's surely contributed to rent inflation.