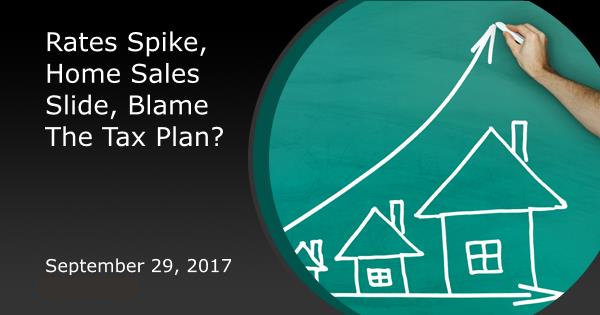 Much was made of the Trump administration's tax plan, officially released this week. At first glance, it caused rates to spike on Wednesday, abruptly derailing a decent recovery from a broader rate spike that ended last week. But how much credit does it deserve?

"Some" is probably the best answer.  It's important to understand that no new changes to the tax system were announced.  The tax plan, which first arrived in the form of widespread media leaks on Tuesday night, is currently more like a set of working principles for eventual legislation.

Pundits don't expect congress to draft legislation that perfectly matches those principles, nor do they expect any major changes to the tax code to quickly sail through the legislative process.  If that were the case, we'd expect to see both stocks and bonds reacting in a more unified way.  Instead, stock prices didn't rise nearly as quickly as rates.  That's our first clue that this week's rate spike had more than one motivation. 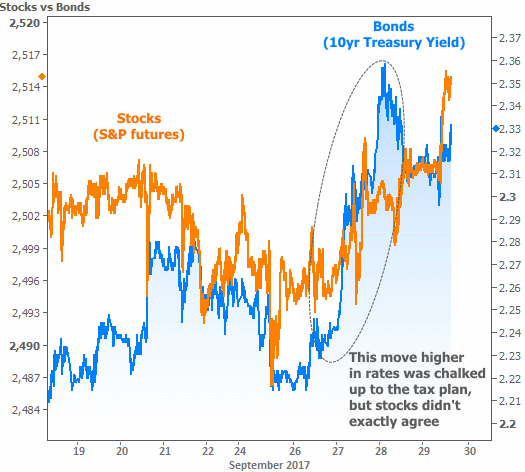 Rates might not have reacted much at all had it not been for the path they'd walked in recent weeks.  Let's recap that path.

Rates fell sharply heading into the weekend of Sept 8-9th due to North Korea risks and apprehension over Hurricane Irma.  An imbalance of trading positions played a key role in setting the pace of that move.  Simply put, too many traders were betting on rates moving higher (betting on higher rates = "short positions").

When unexpected events like hurricanes or the threat of nuclear war push rates lower, traders holding short positions can be forced to "cover," which is accomplished by buying bonds.  That bond-buying in turn pushes rates lower still, thus increasing the risk that the next trader in line will need to cover a short position.  Before long, a domino effect known as a "short squeeze" forces most of the short positions to buy bonds, thus maximizing that particular drop in rates.

Once short squeezes run their course, the bounce back can be abrupt.  That's what happened beginning on Sept 11th.  The rate spike lasted all the way through last week's Fed Announcement, which served as the next opportunity for traders to change their betting strategy.

The new strategy called for buying the longest-term debt, like 30yr Treasury bonds, and shunning the shortest term debt.  As can be seen in the chart below, another imbalance emerged.  This time, it was in favor of lower long-term rates. 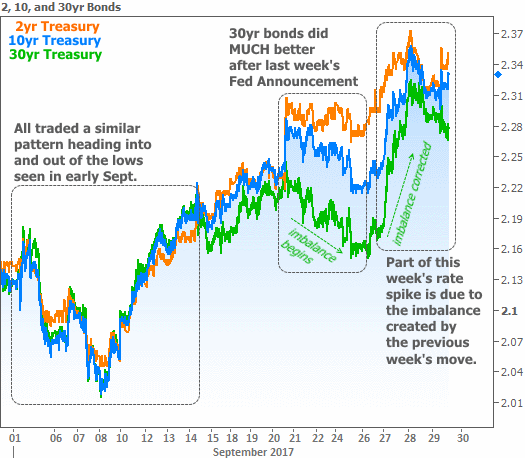 In short (no pun intended), the official announcement of the tax plan--combined with a generally optimistic reception from other lawmakers--served as a wakeup call for bond markets.  If such a plan could get any traction, and if even parts of it became law, it suddenly didn't make as much sense for traders to be pushing long-term rates lower.  After all, the goal of the plan is to "pay for itself" via better economic growth over the next 10 years--not the kind of news you want to hear if you just bought 10-30 year bonds.

The next chart is more of an addendum to this conversation on rates.  It's a broader view of 10yr Treasury yields--the best benchmark for momentum in longer-term rates like mortgages.  It shows how the recent "sideways-to-slightly-lower" trend was stretched earlier in the month and how quickly rates have moved back to test the other boundary. 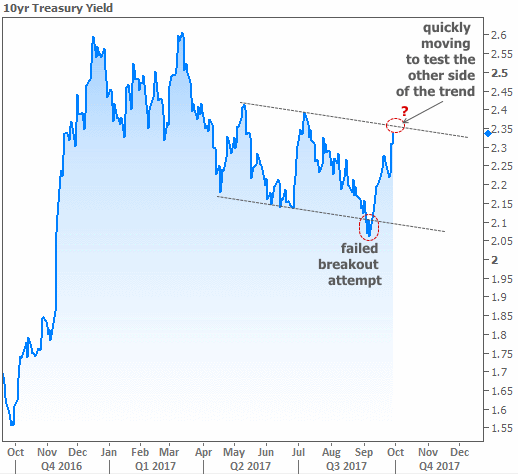 On a relative bright note, mortgage rates don't tend to follow this sort of volatility in lock-step.  While 10yr yields have risen more than a quarter of a percentage point from September's lows, the average 30yr fixed mortgage rate has only seen a fraction of that move.  The risk would be that bond markets generally keep weakening into the end of the year.  In that case, mortgage rates would likely break out of their prevailing trend (green dotted line below) and risk a bigger move into the low 4% range (red dotted line). 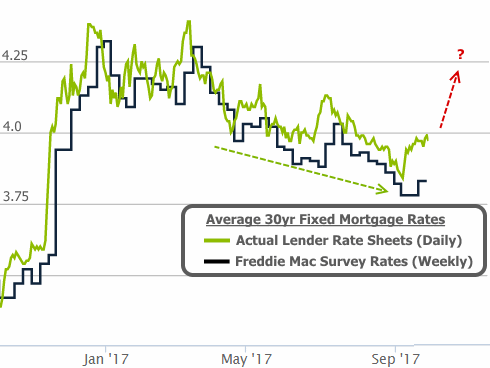 A rate spike comes at a bad time for home sales numbers.  Both of this week's key reports were downbeat.  New Home Sales fell to an annual pace of 560k from 580k last month.  In and of itself, this isn't a major concern right now, as the broader trend could remain positive if sales pick back up.  The more forward-looking Pending Home Sales data, on the other hand, is suggesting a gloomier outlook. 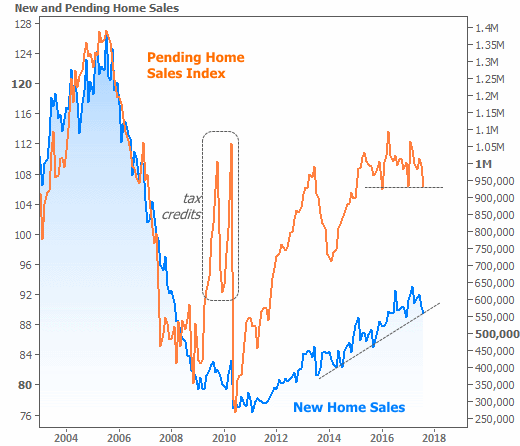 Even if it's a bit early to be considering gloomy eventualities, one thing's for sure: rising rates won't last very long if they end up torpedoing the economy.  Proponents of the tax plan argue higher rates would be absorbed by better growth and more retained income, but the average family with the average mortgage payment would see most of that benefit sucked up by higher mortgage payments if everything goes according to plan.  Something's gotta give!