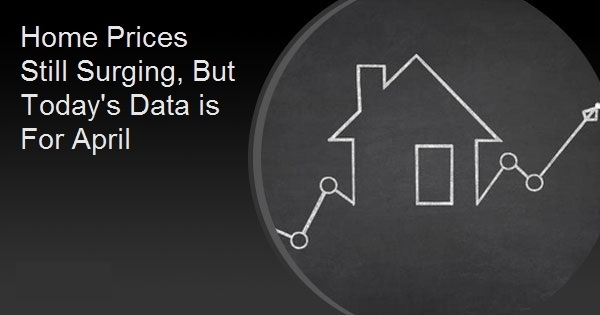 Home Prices Still Surging, But Today's Data is For April

It's one of the perennial "yeah buts" of the two largest and most widely-cited home price indices: there data is always about 2 months old by the time it comes out.  This is the nature of home price reporting.  It doesn't mean the data is bad or wrong--simply that it should be taken with a grain of salt given that interest rates and consumer sentiment took a decisive turn for the worse in both May and June.

So if you've had your salt, here's the latest on home prices (in April) from both the FHFA and S&P Case-Shiller:

There are a few ways to glean more timely data, but there are grains of salt here too.  The following chart shows the percentage of active listings with price drops as of last week.  It DOES NOT take into account the extent to which those homes may have been swinging for the fences in terms of list price.  It also doesn't make any comment about the actual final sales price.  It's highest and best use would be to suggest a general shift has taken place over the past 2 months (the same 2 months not counted by the big indices above) from a frothy real estate valuation landscape to "something else."  In so many ways, it remains to be seen what "something else" ultimately looks like.