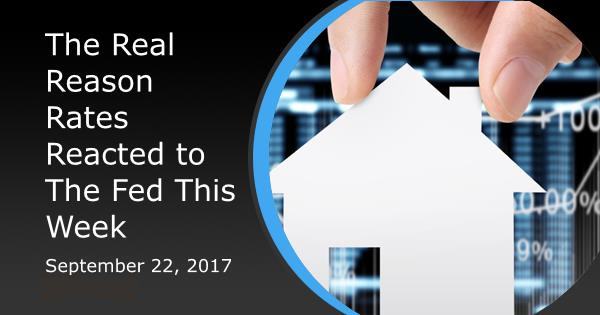 The Real Reason Rates Reacted to The Fed This Week

The Federal Reserve finally pulled the trigger on its much-anticipated balance sheet normalization plan. This was billed as big news--a major turning point in US monetary policy.  While that's arguably true, markets were far more interested in other parts of the Fed announcement.

The Fed meets to set policy 8 times a year.  On 4 of those occasions, the Fed also releases its economic projections (forecasts about the economy and the Fed Funds Rate from each Fed member) and the Fed Chair holds a press conference to discuss monetary policy developments in greater detail.

Markets have grown to expect the biggest policy shifts at these "on-cycle" meetings (the ones with the additional events) and the Fed hasn't done anything to challenge that assumption.  Indeed, they all but guaranteed this week's meeting would mark the official start of the balance sheet normalization plan first released in early July.

"Balance sheet normalization" simply means the Fed will buy slightly fewer bonds and mortgage-backed-securities (MBS) each month.  To be clear, the Fed was adding more and more bonds each month under the various quantitative easing (QE) programs.  This caused the balance sheet to grow.

The "taper tantrum" of 2013 had to do with a gradual decrease in the amount of new bond buying (tapering officially started in early 2014).  Since the end of QE3 in October 2014, the Fed has been keeping its balance sheet steady by simply replacing bonds in its portfolio as they were paid down.  This is generally referred to as the Fed's "reinvestment policy."

Balance sheet normalization refers to the winding-down of this reinvestment policy.  In other words, the Fed will be buying fewer and fewer Treasuries and MBS.

Reinvestments account for the lion's share of purchase demand for newly originated Fannie and Freddie 30yr Fixed mortgages.  They're also a major source of demand for Treasuries.  As such, reinvestments are one of the key ingredients in the low rate environment.

Naturally, investors were (and still are) concerned about the effects of normalizing the balance sheet, but the Fed has done a good job of convincing markets that it will be an even more gradual process than the tapering of QE purchases, and that the balance sheet will end up leveling-off at a much higher dollar amount than before the Financial Crisis.

All of the above meant that this week's official normalization announcement was a mere formality.  Every sane market participant knew this was coming ahead of time.  And when markets know something ahead of time, they'll always do their best to trade accordingly.

What markets CAN'T know ahead of time is how the Fed's rate hike outlook had evolved between now and the last set of official projections back in June.  More than a few traders figured the Fed would convey a much slower pace of rate hikes based not only on the economic data over the past few months, but also on several Fed speeches.  Some of those speeches were unequivocal in conveying doubts about the pace of rate hikes in the future.

Ultimately though, the individual speeches only represent the individual Fed member doing the speaking.  When the rest of the Fed forecasts were included, the median viewpoint of the Fed Funds Rate through the end of 2018 was unchanged from the June meeting!

Market participants weren't necessarily expecting a huge deceleration in the rate hike outlook based on recent Fed speeches, but they were certainly expecting something better than "unchanged."  Simply put, market expectations were out of line with the Fed's reality, and trading levels had to correct fairly quickly. 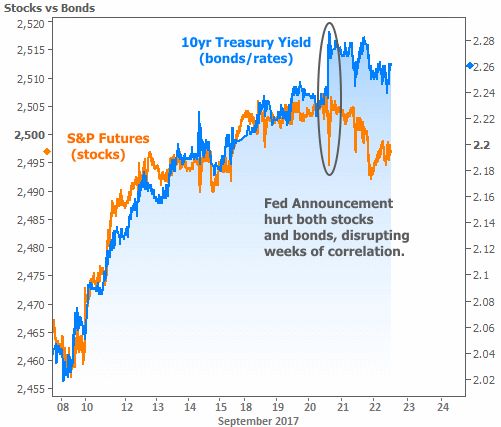 A longer-term view shows the relationship between 10yr Treasury yields (the best benchmark for general momentum in longer-term rates) and Fed Rate Hike Expectations (based on Fed Funds Futures--securities that can be traded by way of betting on where the Fed's rate winds up in the future).  This chart does a good job of conveying a strong directional correlation (i.e. the two lines almost always move in the same direction) but one that varies in intensity (i.e. rate hike expectations took the news harder than long-term rates in the bigger picture). 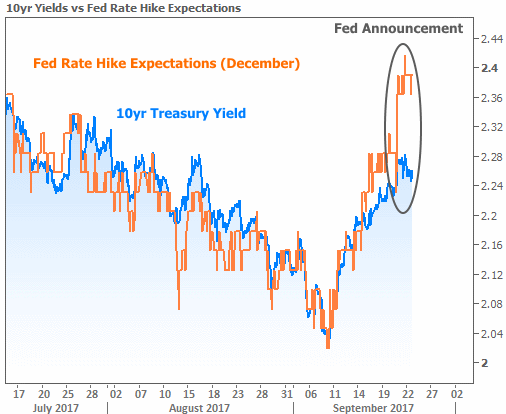 In terms of the effect on mortgage rates, you have to be careful what you read this week.  Rate are definitely higher.  The issue is that the widely-quoted weekly rate survey from Freddie Mac suggests rates only moved up 0.04% from recent long-term lows.  In reality, rates have risen 2 to 3 times that much based on daily data from actual lender rate sheets.  Also worth noting is that rates were already rising briskly last week when the Freddie survey pegged them as "unchanged." 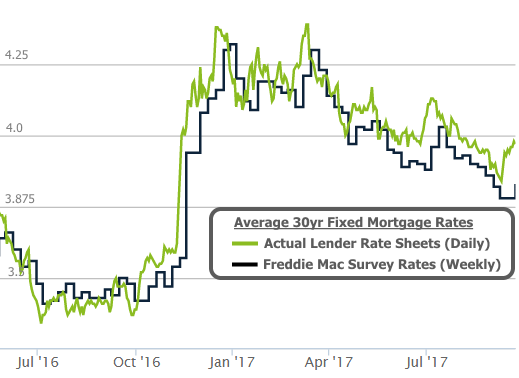 The implications for the housing and mortgage markets depend on how things evolve from here.  For now, rates have only moved up about an eighth of a percentage point from recent lows--not enough to do major damage to purchase and refi demand in and of itself.  If rates continue higher, however, housing metrics would increasingly risk turning a corner.

At the very least, higher rates won't help us break through the stagnation seen in some of this week's housing reports.  According the the Census Bureau, Housing Starts and Building Permits continue to hover in the 1.1 to 1.3 million range.  We first entered that range more than 2 years ago! 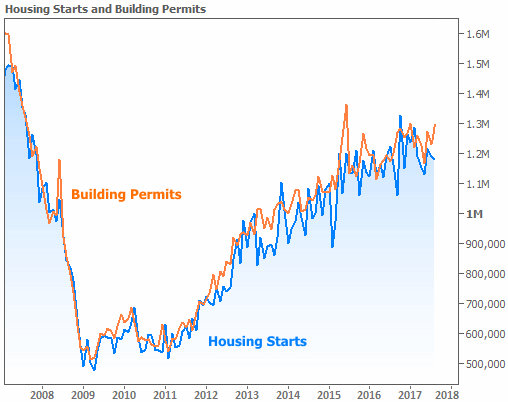 Existing Home Sales took a turn for the worse this month, but the National Association of Realtors notes that the numbers would have been more stable were it not for Hurricane Harvey's impact.  Even so, Existing Sales already dipped below a 5.5 million annual pace last month, bringing them back in line with the range that also began in early 2015. 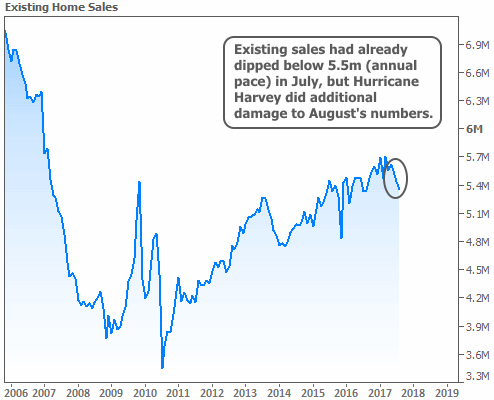