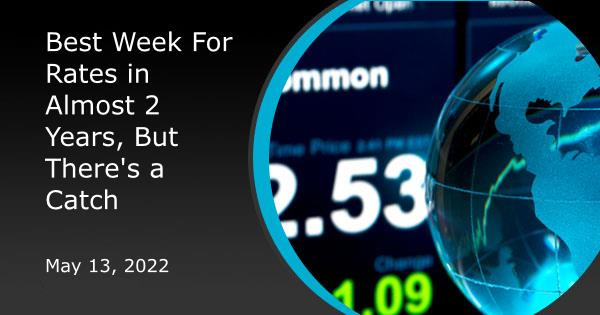 Best Week For Rates in Almost 2 Years, But There's a Catch

Mortgage rates have moved higher at the fastest pace in decades so far in 2022, but this week proved to be a refreshing exception.  To understand why, we first need to examine the relationship between stocks and bonds, which is a bit more variable than most people assume.

Conventional wisdom holds that stock prices and bond yields correlate with each other.  This makes good logical sense from the standpoint of selling one to buy the other.  For instance, if you sold bonds to buy stocks, bond yields and stock prices would both move higher together.

While we often see this correlation over short time frames, the longer term trends tend to be quite different.

To make matters more confusing, despite the INVERSE relationship over the longer run, there are definitely pockets of time where investors are moving money out of stocks, into bonds, and vice versa.  This week hasn't been flawless in that regard, but it has generally seen more of that conventional wisdom type of movement.

As the highlighted portions of the chart point out, we can see examples of conventional wisdom and the opposite sort of movement in close proximity to one another. In other words, sometimes the orange and blue lines quickly moved in opposite directions despite mostly following each other.

Generally speaking, one of the most common reasons to see stocks and bonds jump in opposite directions is Fed policy.  Even though the Fed conducts monetary policy in the bond market, when the Fed's policies are looser, the entire market tends to benefit.  Conversely, when the Fed shifts toward a tighter policy stance--as has been the case on multiple occasions over the past 6 months, both stocks and bonds tend to suffer.

The Fed didn't make any policy changes on the morning of May 11th.  Rather, it was the release of April's inflation numbers that briefly led investors to fear more tightening on the part of the Fed.  Inflation is, after all, the big reason for the Fed's big shift in 2022.

There are a few ways to measure inflation.  The chart above is only one of the numbers that came out this week.  Although it was slightly lower versus the previous reading, economists were expecting a bit more of a drop.  This led to the temporary reaction that sent bond yields higher and stocks lower.

The middle of the week was dominated by additional weakness in stocks and a refreshing improvement in bonds, but the trend reversed on Friday as stocks found their footing.  Bond yields moved higher at the same time, but not at the same pace.  In fact, even after the losses, it was the best week of the year for bonds so far--at least when it comes to the pace of improvement.

Bond yields are highly correlated with mortgage rates.  The strong week for bonds meant a strong week for mortgages.  Even after rates edged higher on Friday, it was still the best week over week improvement in nearly 2 years.  The caveat is that such an accomplishment was only made possible by rates starting the week at the highest levels since 2009.

Note: there are multiple news stories suggesting rates moved higher this week due to the prevalence of Freddie Mac's weekly mortgage rate survey as a source for news outlets.  Freddie's data is fine as long as it's understood.  Specifically, a majority of survey responses are received on Monday of any given week, but the results are not published until Thursday.  That means it usually ends up being a "Monday vs Monday" number.  Indeed, this Monday's rates were higher than last Monday's, but the point is that when we look at actual daily offerings, this Friday was quite a bit better than last Friday.