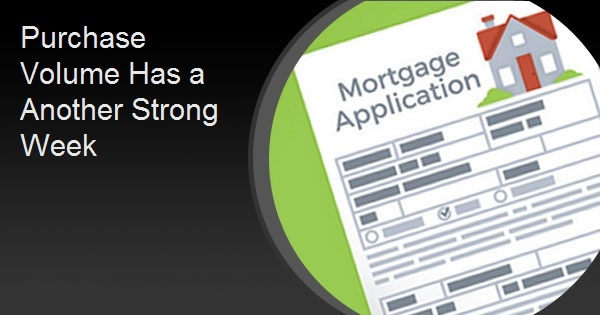 Purchase Volume Has a Another Strong Week

Mortgage application volume continued its recovery last week driven by a second strong increase in purchasing activity. The Mortgage Bankers Association said its Market Composite Index, a measure of that volume, gained a seasonally adjusted 2.0 percent and increased 3.0 percent on an unadjusted basis from one week earlier.

Refinancing, which had eked out its first gain in eight weeks in the previous period, fell back by 2.0 percent and was 72 percent lower than the same week one year ago. The refinance share of mortgage activity decreased to 32.4 percent of total applications from 33.9 percent the previous week.

“The increase in mortgage applications last week was driven by a strong gain in application activity for conventional and government purchase loans, even as mortgage rates rose to their highest level – 5.53 percent – since 2009,” said Joel Kan, MBA’s Associate Vice President of Economic and Industry Forecasting.  “Despite a slow start to this year’s spring home buying season, prospective buyers are showing some resiliency to higher rates. Purchase activity has now increased for two straight weeks. More borrowers continue to utilize ARMs to combat higher rates. The share of ARMs increased to 11 percent of overall loans and to 19 percent by dollar volume.”

Other highlights from MBA survey data: