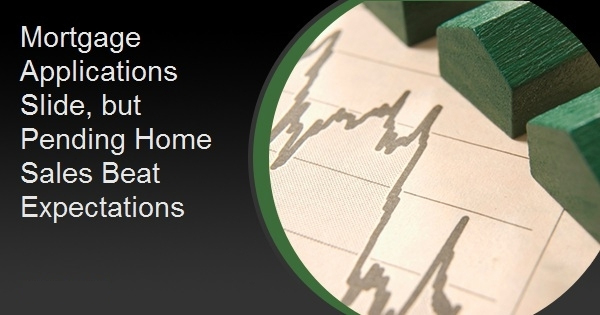 Today brought 2 new scheduled data releases for the housing market.  Both were fairly logical given the variables in play.  So far in 2022, one of the most obvious and troublesome variables for the mortgage market has been the historically rapid rate spike.  Average 30yr rates are now at levels not seen since 2009.

Big rate spikes don't always affect the purchase market in the same way, but the reaction in terms of refinance applications is highly correlated.  As such, it's no surprise to see this morning's application data from the Mortgage Bankers Association (MBA).

Purchase applications are also at their lowest levels since the early days of the pandemic, but still at stronger levels relative to the previous 10+ years.  While interest rates are weighing on purchases to some extent, it's hard to say how much of the blame they deserve compared to the general cooling effect following the frenzied pace seen in much of 2020-2021.

The National Association of Realtors (NAR) concurs on the cooling.  Today's report on Pending Home Sales was slightly stronger than economists expected, falling only 1.2% from last month compared to a median forecast calling for a 1.6% drop.  But that is the 5th straight month of declines.  Here too, outright levels are as low as they've been since the initial months of the pandemic.

"The falling contract signings are implying that multiple offers will soon dissipate and be replaced by much calmer and normalized market conditions," said Lawrence Yun, NAR's chief economist. "As it stands, the sudden large gains in mortgage rates have reduced the pool of eligible homebuyers, and that has consequently lowered buying activity."

The MBA's assessment was slightly more downbeat with respect to the outlook. "Prospective homebuyers have pulled back this spring, as they continue to face limited options of homes for sale along with higher costs from increasing mortgage rates and prices. The recent decrease in purchase applications is an indication of potential weakness in home sales in the coming months," said Joel Kan, MBA’s Associate Vice President of Economic and Industry Forecasting.

Other highlights from the applications data: