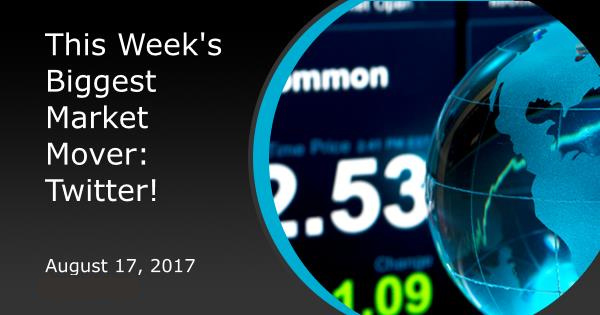 Twitter might not be the first place you look for authoritative financial news, but its impact on markets is increasingly undeniable. That's actually been the case for a long time, but weeks like this really drive home the point.

First of all, let's disambiguate the concept of Twitter as far as financial news sources are concerned.  In and of itself, Twitter is nothing more than a medium to facilitate faster, broader communication.  It's not a market mover because it is hosting new, unique news, but simply because it provides a venue for more rapid dissemination of news that already existed.

Whereas only a handful of market participants (let's say "thousands") might have seen a newswire on a trading terminal 15 years ago, Twitter can get that newswire in front of millions in the time it takes one of the aforementioned market participants to copy and paste it.  That's why it matters.  It vastly extends the reach of news that might move markets.

It's a sign of the times that this week's biggest market mover was a tweet that happened an hour before the release of the Fed Minutes (a more detailed account of the late-July Fed meeting).  While we didn't necessarily expect any shocking news from the Fed Minutes, traders still treat it with respect.  It still garners a noticeable uptick in volume (and sometimes volatility).

This time around, any of the typical reaction reserved for the Fed Minutes was overshadowed by a single Trump tweet.  The president said "Rather than putting pressure on the businesspeople of the Manufacturing Council & Strategy & Policy Forum, I am ending both. Thank you all!"

Different media outlets have slightly different ideas on why this mattered to markets so much.  In general, they agree that several CEOs had already quit the council/forum over Trump's "blame on both sides" press conference following the violence in Charlottesville, VA," and that Trump was in some way preempting further attrition.

Regardless of one's political views, the disbanding of a group of CEOs that were brought together in order to work with the administration toward a stronger economy is almost sure to be seen as a net-negative for the economy.  At the very least, it increases economic uncertainty--something that tends to push rates lower.

That's exactly what happened on Wednesday.  By the time the Fed Minutes came out 47 minutes later, most of the move was over.

Just in case the Twitter factor wasn't clear, markets were rocked on Thursday by mere RUMORS that Gary Cohn would step down as Trump's Economic Advisor.  Those rumors were later denied, but the market movement remained intact.  With that, all of the upward movement in stocks and rates seen after de-escalation of the North Korea situation was erased. 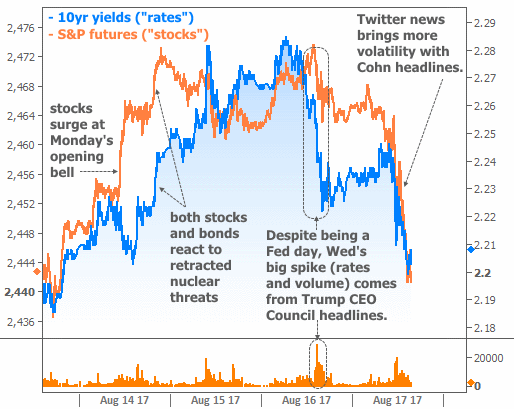 If you're wondering why markets wouldn't bounce back after the Cohn headlines were debunked, you're not alone.  It actually doesn't make good logical sense at first glance.  The underlying reason has to do with trading positions--specifically the "set it and forget it" type of trading protocols that are typical for the time of year.

In an attempt to make a complicated topic as simple as possible, let's imagine a bond trader is out of the office and has left instructions (with a computer program or human associates) to make one trade if markets are moving in a certain direction.  These trades will typically "close" an "open" position in order to prevent further losses or to book a certain amount of profit.  Once that position is closed, there are no further instructions about re-opening it.  The trader is no longer exposed, so they'll deal with taking on new positions next week.

Bottom line: if a fake event moves markets enough to trigger these automated trades (which incidentally tend to add to market movement in the prevailing direction), and if those automated trades are "one-and-done," it's no surprise to see a lack of response when the truth comes out.

In housing-specific news, there was only one key economic report this week.  The Census Bureau reported a downtick in Housing Starts and Building Permits in July.  These construction metrics are increasingly showing signs of stagnation at historically interesting levels.  At roughly 1.2 million units (annual pace), the numbers are right in line with the lower edge of the prevailing range for the 30 years that preceded the financial crisis.  Housing optimists hope that this stagnation is merely a pause before further improvement while housing bears see it as something of a "new normal."  Either way, it will take years to find out who's right. 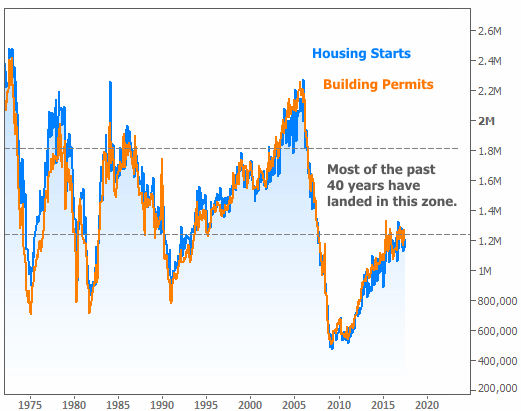