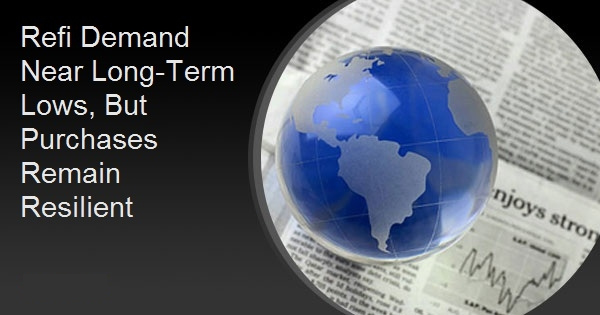 For most of 2010 through the middle of 2013, the purchase mortgage market languished as homebuyers were reluctant to come back to the table after the expiration of homebuyer tax credits.  There was also still a fair amount of uncertainty in the wake of the Financial Crisis.

At the same time, rates were plunging progressively to all-time lows by the middle of 2012.  Refinance demand soared as a result.  Purchases advanced slowly and steadily starting in 2015, ultimately topping out in early 2021.  This coincided with another surge in refi demand as rates hit new all-time lows.

Ever since the once-in-a-generation rate spike seen so far in 2022, logical things have happened to refi demand.  The most recent weekly application survey from the Mortgage Bankers Association (MBA) shows it falling to new long-term lows, now nearly back to 2018 territory.  If apps fall below 2018's lows, we'd have to back more than 20 years to see lower refi demand.  Purchase demand, on the other hand, remains in decent territory.

Here's the same chart with a wider field of view showing the refi boom in 2010-2013 while purchases languished, and the purchase market of 2018 while refis languished.

Other highlights from this week's application data: