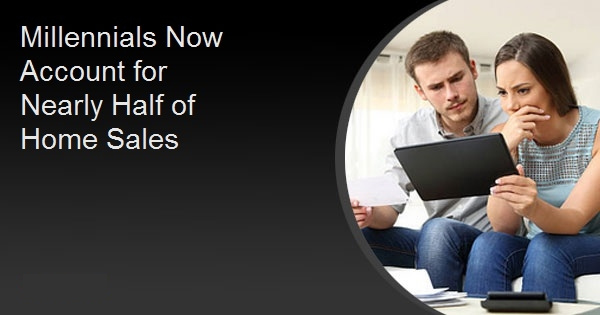 Millennials Now Account for Nearly Half of Home Sales

While they began to become homeowners at a more advanced age than many of their predecessors and encountered an abnormally high number of obstacles getting there, Millennials are now driving the housing market. The 2022 Home Buyer and Seller Generational Trends report from the National Association of Realtors® (NAR) says the Millennial bloc, now aged 23 to 41, are accounting for more transactions than any other age group, 43 percent of home sales, up from 37 percent a year earlier.

NAR also found that first-time home buying among younger generations is on the rise, with over 4 out of 5 younger Millennials, those 31 and younger, purchasing for the first time. Just under half of older Millennials were first timers.

Baby Boomers made up largest share of home sellers at 42 percent although the percentage of Millennial sellers is on the rise, increasing 4 percentage point to 26 percent over the past year. It is now more likely for an older millennial (aged 32 to 41) to a first-time seller than a first-time buyer.

Debt is a problem for many homeowners and the report says those in Gen X (now 42 to 56) and younger boomers (those below age 65) delayed heir home purchase the longest (5 years) due to debt. Younger Millennials had the highest share of student debt at 45 percent and a median amount of $28,000. Twenty-seven percent of younger Millennials said saving for a down payment was the most challenging step in the home buying process and nearly one in three received down payment help in the form of a gift or loan from a friend or relative. One-quarter lived with friends or family to save on rental costs.

Gen Z, the leading edge of which is just 22, are jumping into homeownership at a relatively early age. They made up 2 percent of both buyers and sellers.

Young Millennials use tech more than any other group, 65 percent found the home they ultimately purchased online, but 92 percent used an agent for the purchase as did 87 percent of all buyers.

Buyers from all generations agreed on the top reasons for using an agent: they wanted help finding the right home to purchase, negotiating the terms of sale and negotiating the price. The Silent Generation – those between the ages of 76 and 96 – as well as younger Millennials were also more likely to want an agent’s help with paperwork.

“Some young adults have used the pandemic to their financial advantage by paying down debt and cutting the cost of rent by moving in with family. They are now jumping headfirst into homeownership,” said Jessica Lautz, NAR's vice president of demographics and behavioral insights. “While young buyers use new tech tools, they also use real estate agents at higher rates than other buyers to help find the right home and negotiate the terms of the transaction.”

Generation X had the highest median household income at $125,000 and bought the largest and most expensive homes at 2,300 sf and $320,000. The Silent Generation bought the smallest homes at a median of 1,800 sf. Across all generations, the greatest share of buyers purchased in suburban areas (51 percent) and small towns (20 percent).

“Many factors can contribute to the decision to buy or sell a home,” Lautz continued. “For all home buyers under the age of 57, the main driver was the desire to own a home of their own. Among those 57 and older, the desire to be closer to friends and family was the top reason, followed by the desire for a smaller home.”

Overall, buyers expected to live in their homes for 12 years, down from 15 years last year. For younger Millennials and the Silent Generation, the expected duration was only 10 years, compared to 20 years for younger boomers.