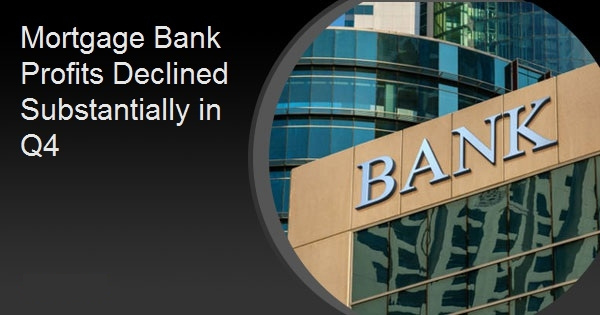 The data is in for Q4, 2021, and it was not a good quarter for mortgage profitability according to the Quarterly Mortgage Bankers Performance report from the Mortgage Bankers Association (MBA).  The data covers 359 companies with 83% being independent mortgage banks (IMBs) and the remainder falling into the category of "subsidiaries and other non-depository institutions."

“Production margins tightened substantially in the fourth quarter of 2021. After a two-year run of above-average profitability, pre-tax net production income per loan reached its lowest level since the first quarter of 2019,” said Marina Walsh, CMB, MBA’s Vice President of Industry Analysis. “Among the headwinds were lower revenues and higher production costs.”

This doesn't mean the industry was unprofitable.  Indeed, 76 percent of the study reported a pre-tax profit.  That number falls to 58 percent if the income from loan servicing is factored out. Notably, 92 percent reported a profit in Q3, 2021.

But as Walsh notes, "the average cost to originate a mortgage has now risen for six quarters in a row, reaching a study-high of almost $9,500 per loan by the end of 2021."

Other highlights from the report: