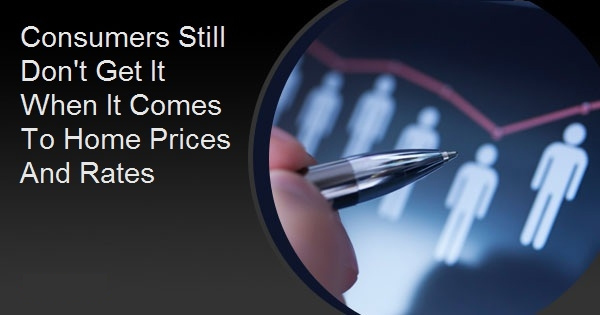 All too often, when it comes to consumer surveys about the future, the results tend to reflect what has already happened as opposed to what will continue to happen.  Of course, trends can remain intact, but other times, the writing is on the wall.

Looking back at the start of the pandemic, consumers thought the writing was on the wall with respect to home prices according the Fannie Mae's monthly National Housing Survey.  A net of 39% of respondents thought home prices would continue to go up in early 2020.  A few short months later, more were convinced that home prices would fall.

From that point on, the net % of those who thought prices would rise NEVER returned to the 39% pre-pandemic high.  All this despite months and months of record-setting home price appreciation.  The following chart shows this journey.  Focus on the black charted line and the horizontal level line at 39%:

Consumers clearly thought the pandemic had turned a corner by early 2021.  Covid numbers were declining and price appreciation had been so surprising that, surely, things must have topped out, right?

Wrong...  By September 2021, the trend reversed course (thank you, Delta variant), and the black line started to move back in a logical direction.  But even though it ticked up slightly again in the most recent survey, does it make sense for the net percentage to remain almost 10% below the pre-pandemic net percentage?

Spoiler alert: no it doesn't.  Sure, price appreciation will cool.  It has to at some point.  But it would take many months of deceleration before an actual drop in prices was even on the table.

On the topic of rates, consumers have been doing a bit better, but still mostly following the broader trends.  This time around, a record number thought rates would go up.

Indeed, rates could continue to go up, but the magnitude of any additional increase is not proportional to these consumer expectations.  Rates have risen in response to the Fed's shift in monetary policy.  Mortgage rates are able to react to that shift relatively quickly whereas it will take the Fed more than a year to get where it's going.  And by then, the outlook could easily change again.

The point is that rates have already risen by a substantial amount.  Past precedent suggests we've already seen a majority of the increase.  Take a look at the following chart and compare the current rising rate trend to that seen in 2017-2018.  Each red rectangle is exactly the same height.

Here are a few other selected charts from the Fannie Mae survey, submitted with limited comment: