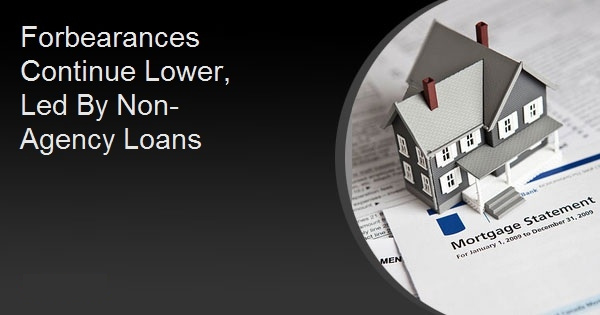 The Mortgage Bankers Association released its monthly update on the share of mortgages in forbearance.  Forbearances spiked as the pandemic began, but have been declining gradually since May 2020.

Fannie and Freddie loans (a majority of the mortgage market) did the best throughout this process.  As a result, they've had less ground to cover recently.  In the current report, the percentage of Fannie/Freddie loans in forbearance decreased from 0.68 to 0.64%.

Contrast that to non-agency loans (portfolio or private-label) which declined from 3.43 to 3.02%--a significantly quicker pace of reduction, but from a much higher level.

Ginnie Mae loans (FHA, USDA, VA) broke the rules to some extent.  They continue to account for a higher proportion of forbearances than Fannie/Freddie loans, but they didn't decline as quickly this time, dropping only 0.03% to 1.60%.

Other highlights from MBA's report: