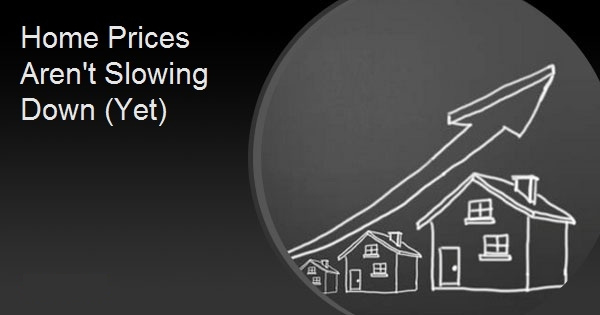 Home Prices Aren't Slowing Down (Yet)

Home price appreciation peaked in July with the FHFA House Price Index up 19.3% year-over year and the S&P CoreLogic Case-Shiller 20-City Index up 20.0%.  Both have come off the boil since then, but only slightly.

Today brought the most recent update for both reports (through December).  Here are the relevant details:

In other words, prices are showing a relatively relentless determination to maintain an upward trajectory.  As far as December's data is concerned, price growth has merely leveled off as opposed to having turned a major corner back in July.

“After some signs of slowing home price growth and three months of deceleration in the S&P CoreLogic Case-Shiller, the index remained steady in December – up 18.84% year over year from the 18.79% increase in November. This suggests that home buyers have not yet thrown in the towel. On the contrary, the re-acceleration of annual home price growth occurred in 15 of the 20 metro areas, with San Diego, Dallas, San Francisco, Miami and Charlotte, North Carolina, experiencing the largest pick up in gains. The increase was also relatively stronger for higher priced homes. Buyers may have been rushing in anticipation of higher rates, though most recent data suggests that demand remains vigorous despite the 100 basis point increase in rates. However, as rates continue to pick up, budget-constrained buyers will face more challenges, likely leading to some waning demand.”

Nonetheless, CoreLogic's own forecast is for appreciation to decline in 2022.  (Here's our coverage of that forecast)

In addition to the highly technical market analysis technique known as "what goes up must come down," analysts are fairly certain that the big spike in mortgage rates over the past 2 months will take a toll on prices.  That reaction would NOT yet be seen in the monthly home price reports due to their normal reporting lag of roughly 2 months.

Even then, mortgage rate spikes have historically taken even longer to translate to impacts on price appreciation.  The last 2 examples suggest anywhere from 4 to 8 months, as seen in the chart below.  If past patterns are repeated, price growth could remain elevated into the summer months.

Caveats abound, of course.  Chief among these is the fact that we don't have any perfect precedent for the type of price surge seen post-covid.  From a purely technical standpoint, 18-20% per year price appreciation is its own reason for deceleration.

In other words, prices are already well past the point of moving too high, too fast for the pace to be sustained (thanks to record low inventory, primarily).  While this doesn't necessarily mean that prices move lower, there's no question that the rate of appreciation will be slowing.  The only questions are "when" and "by how much?"