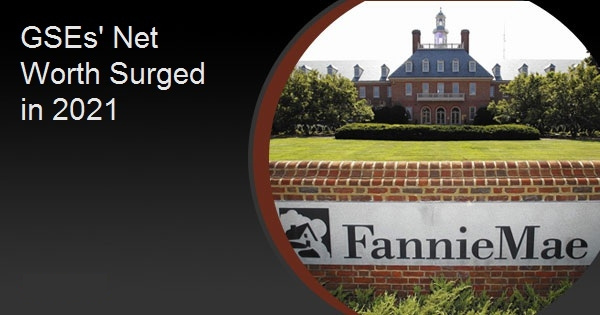 Both Fannie Mae and Freddie Mac (the GSEs) reported substantial increases in their financial results for 2021 when compared to 2020 and a greatly improved net worth. Fannie Mae’s performance also improved from the third quarter of 2021 to the fourth, but Freddie Mac reported lower results.

Net interest income rose by $4.72 billion year-over-year to $29.59 billion and was 9.0 percent higher quarter-over-quarter at $7.59 billion. Fee and other income fell 46 percent from the third quarter to $60 million and was 22 percent lower for the year at $361 million.

Credit related income shifted from an expense of $855 million in 2020 to revenue of $5.10 billion last year, driven by actual and forecasted home price growth, an increase in the volume of redesignations, and a reduction in expected losses occasioned by the pandemic.

Freddie Mac reported net comprehensive income of $11.62 billion for the year, compared to $7.53 billion in 2020. The gain came despite a $600 million increase in operating expenses year-over-year to a total of $5.72 billion. Net interest income increased by $1.10 billion to $17.58 billion and investment gains rose from $1.81 billion to $2.75 billion. Guarantee fee income however declined by about $300 million to $1.032 billion.

The company’s comprehensive income for the 4th Quarter was $2.72 billion, a slight downturn from $2.909 in Q3 and a 6 percent decline from the fourth quarter of 2020. The company said the latter change was due to an increase in credit related expenses.