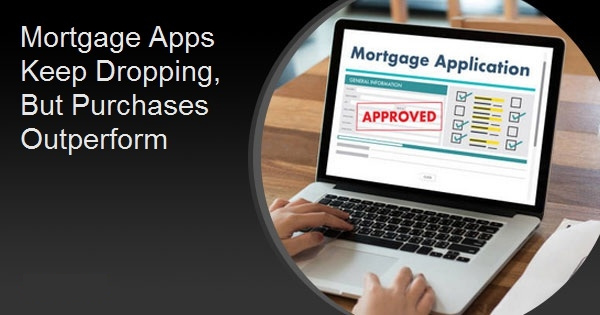 The volume of mortgage applications declined for the second week as interest rates for some products crossed the 4.0 percent line. The Mortgage Bankers Association (MBA) said its Market Composite Index, a measure of that volume, decreased 5.4 percent on a seasonally adjusted basis from one week earlier and was down 3 percent on a non-adjusted basis.

The Refinance Index dropped by 9 percent week-over-week and 54 percent compared to the same week in 2021. The refinance share of activity decreased to 52.8 percent of total applications from 56.2 percent the previous week. It was the lowest share for refinancing since July 2019.

The seasonally adjusted Purchase Index decreased 1 percent although it was 5 percent higher on an unadjusted basis. It declined 7 percent compared to the same week one year ago.

“Mortgage rates increased across the board last week following the recent rise in Treasury yields, which have moved higher due to unrelenting inflationary pressures and increased market expectations of more aggressive policy moves by the Federal Reserve," said Joel Kan, MBA's Associate Vice President of Economic and Industry Forecasting. "The 30-year fixed rate saw the largest single-week increase since March 2020 and was above the 4 percent mark for the first time since 2019. Consistent with this period of higher mortgage rates, refinance applications fell 9 percent last week and stood at around half of last year’s pace."

Added Kan, “Purchase applications saw a modest decline over the week, with government purchase applications accounting for most of the decrease. Prospective buyers still face elevated sales prices in addition to higher mortgage rates. The heavier mix of conventional applications again contributed to another record average loan size at $453,000.”

The FHA share of total applications increased to 8.3 percent from 8.0 percent and the VA share dipped to 9.3 percent from 10.0 percent. The USDA share of total applications was unchanged at 0.4 percent. The average loan size was $372,600, up from $366,200 the previous week and the new record size of a purchase mortgage was an increase from $446,900.

Jumbo FRM, loans with origination balances exceeding the conforming limit, had an average rate of 3.81 percent, a 19-basis point increase. Points increased to 0.39 from 0.35 and the effective rate averaged 3.93 percent

The average contract interest rate for 5/1 adjustable-rate mortgages (ARMs) increased to 3.36 percent from 3.13 percent, with points increasing to 0.48 from 0.35. The effective rate increased to 3.54 percent. The ARM share of activity increased to 5.0 percent of total applications from 4.5 percent a week prior.