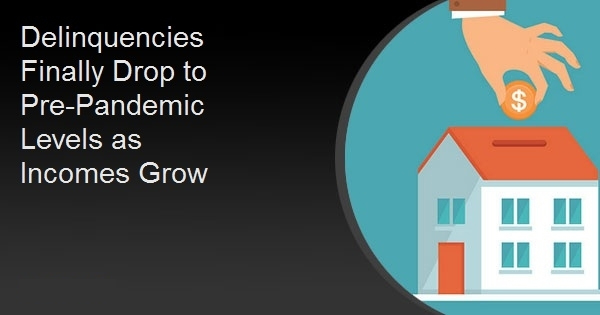 CoreLogic is tying the current mortgage delinquency rate, which is back to pre-pandemic levels, to growth in the nation’s income. The company says the national rate, indicating the percentage of mortgages that were 30 days or more past due or in foreclosure, dropped to 3.6 percent in November. This was down 2.3 percentage points from the November 2020 5.9 percent level.

The company says that, for the first time since the onset of the pandemic, delinquencies nationwide dropped below the March 2020 level of 3.6 percent, calling it a sign that mortgage performance is following the nation’s income growth. At the same time, foreclosure rates remain at historic lows due to the high level of equity borrowers have from the recent record-breaking home price increases. “These factors combined have helped borrowers weather the lasting economic impacts brought on by the pandemic and avoid falling behind on payments or losing their homes,” according to CoreLogic’s loan performance report.

“Nonfarm employment rose 6.45 million during 2021, helping to rebuild income for families under financial stress during the pandemic,” said Dr. Frank Nothaft, chief economist at CoreLogic. “Income growth has helped to reduce past-due rates and home equity build-up has reduced the likelihood of a distressed sale for families that experience financial challenges.”

The number of non-current loans has declined in every stage. Loans that were in the early delinquency, 30 to 59 days past due, represented 1.2 percent of loans in November, down from 1.4 percent the prior November and the rate of those 60 to 89 days delinquent was slashed in half, to 0.3 percent. Serious delinquencies, loans 90 days or more past due, including loans in foreclosure, which reached a high of 4.3 percent in August 2020, are now at a 2.0 percent rate, again only slightly more than half the rate a year earlier.

The foreclosure inventory, the share of mortgages in some stage of the foreclosure process, was at 0.2 percent in November, a 0.1-point year-over-year decline and the lowest recorded since 1999.

The percentage of mortgages that transitioned from current to 30 days non-current in November was 0.6 percent, down from 0.8 percent a year earlier.

Delinquencies declined in all 50 states with the greatest improvement, 3.8 percentage points, in Nevada. Decreases between 3.6 percent and 3.2 percent occurred in New Jersey, Hawaii, Florida, and New York. The only metropolitan area that didn’t experience an improvement in delinquencies was Houma-Thibodaux, Louisiana which was recovering from last fall’s Hurricane Ida.