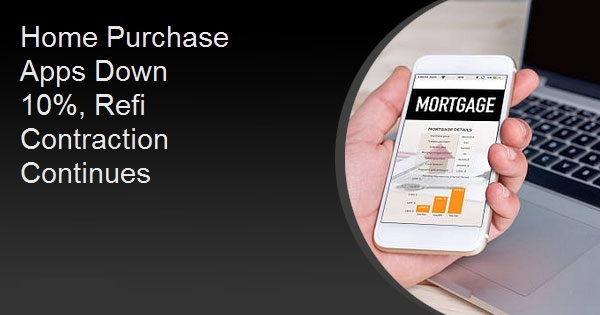 Mortgage application volume surged 12 percent two weeks ago but gave back a large chunk of that gain during the week ended February 4. last week. The Mortgage Bankers Association (MBA) says its Market Composite Index, a measure of that volume, decreased 8.1 percent on a seasonally adjusted basis from one week earlier and lost 6 percent on an unadjusted basis.

The Refinance Index decreased 7 percent from the previous week and was 52 percent lower than the same week one year ago. The refinance share of mortgage activity dipped to 56.2 percent of total applications from 57.3 percent the previous week.

The seasonally adjusted Purchase Index fell 10 percent from one week earlier and was down 3 percent before adjustment. Applications were 12 percent lower than the same week in 2021.

Joel Kan, MBA’s Associate Vice President of Economic and Industry Forecasting said, “Mortgage rates continued to edge higher last week, with the 30-year fixed rate climbing to 3.83 percent. Mortgage rates followed the U.S. 10-year yield and other sovereign bonds as the Federal Reserve and other key global central banks responded to growing inflationary pressures and signaled that they will start to remove accommodative policies. With rates 87 basis points higher than the same week a year ago, refinance applications continued to decrease.

The average contract interest rate for 30-year fixed-rate mortgages (FRM) with loan balances at or below the conforming limit of $647,200 increased to 3.83 percent from 3.78 percent, with points decreasing to 0.40 from 0.41. The effective rate increased to 3.95 percent.

Thirty-year FRM backed by the FHA had an average rate of 3.93 percent with 0.54 point. The prior week the average was 3.86 percent, with 0.55 point. The effective rate increased to 4.09 percent.

The rate for 5/1 adjustable-rate mortgages (ARMs) rose 4 basis points to 3.13 percent and points were unchanged from the prior week at 0.35. The effective rate grew to 3.26 percent. The ARM share of activity was unchanged at 4.5 percent of total applications.