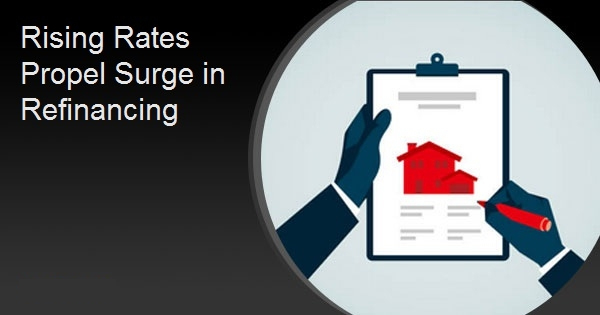 Mortgage volume during the week ended January 28 recovered from a 7 percent decline the previous week to post the largest non-holiday related gain since the last week of March 2020. The Mortgage Bankers Association (MBA)) said its Market Composite Index, a measure of mortgage loan application volume, increased 12.0 percent on a seasonally adjusted basis from one week earlier and was up 15 percent on a non-adjusted basis.

The Refinance Index gained 18 percent from the previous week although it was 50 percent lower than the same week one year ago. Refinancing accounted for 57.3 percent of applications, up from a 55.8 percent share the previous week.

The Purchase Index grew 4 percent on a seasonally adjusted basis and 12 percent before adjustment. Purchase applications were 7 percent lower than the same week in 2021.

“Most mortgage rates in MBA’s survey continued to rise, with the 30-year fixed rate reaching its highest level since March 2020 at 3.78 percent. Despite the increase in rates, refinance applications were up 18 percent, driven mainly by a 22 percent jump in conventional applications. There has likely been some recent volatility in application counts due to holiday-impacted weeks, as well as from borrowers trying to secure a refinance before rates go even higher,” said Joel Kan, MBA’s Associate Vice President of Economic and Industry Forecasting. “Purchase applications also increased in the final full week of January but remained 7 percent lower than a year ago. The average purchase loan size hit a new survey high once again at $441,100. Stubbornly low inventory levels and swift home-price growth continue to push average loan sizes higher.”

The FHA share of total applications decreased to 7.7 percent from 8.6 percent the prior week and the VA share fell to 9.1 percent from 9.9 percent. The USDA share was 0.4 percent, a decline of 0.1 point from the previous week. The new high for purchase loan balances referenced by Kan was an increase from a record $433,500 the prior week. The origination balance for all loans grew from $362,700 to $365,300.

The rate for 30-year jumbo FRM, loans with balances that exceed the conforming limit, increased to 3.59 percent from 3.56 percent, with points decreasing to 0.31 from 0.38.  The effective rate was 3.68 percent.

Fifteen-year FRM rates averaged 3.01 percent, a 1 basis point increased from the prior week. Points grew to 0.41 from 0.39 and the effective rate ticked up to 3.11 percent.

The average contract interest rate for 5/1 adjustable-rate mortgages (ARM) was 3.09 percent with 0.35 point. The prior week the rate averaged 3.18 percent with 0.33 point. The effective rate decreased to 3.22 percent. The ARM share of activity bumped up to 4.5 percent of total applications from 4.4 percent.