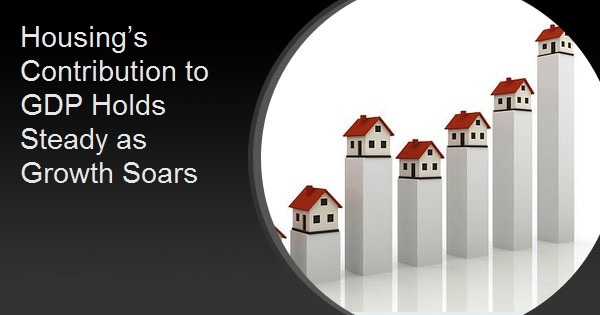 The Gross Domestic Product (GDP) grew 6.9 percent in the fourth quarter of 2021, bringing the year’s growth to an expected 5.5 percent, the fastest since 1984. The consensus of forecasters had been an increase of 5.5 percent for the quarter.

While consumer spending at the beginning of the quarter and inventory in the closing days accounted for the unexpected surge from 2.3 percent growth in Q3, Robert Dietz, chief economist for the National Association of Home Builders (NAHB) says the housing sector certainly played a role.

Residential investment accounted for 16.4 percent of the total GDP. While this was down slightly from the 14-year high of 17.8 percent it reached in the second quarter of 2020, that was a period when much of the country was in lockdown. That year ended with the economy shrinking 3.4 percent.

The housing component of the GDP has two parts. The first is residential fixed investment (RFI) this includes dollars expended for residential construction (single and multifamily) home remodeling, production of manufactured housing and broker fees. Sales of homes are not included in the GDP.

The second component is housing services. This includes gross rents including utility payments from renters and imputed rents from homeowners. The latter is an estimate for what it would cost if they had to rent their homes and pay their utilities. While imputed rents may not seem logical, without this calculation any increase in homeownership would drive the GDP lower.

Dietz said the more cyclical RFI decreased 0.8 percent to 4.6 percent of GDP, reflecting an a seasonally adjusted $1.11 trillion annual pace of spending in the fourth quarter. Investment in both single-family and multifamily structures declined, down 10.4 percent and 2.6 percent, respectively. Housing services represented 11.8 percent and $2.8 trillion of expenditures.

Dietz noted that RFI has historically averaged roughly 5 percent of GDP and housing services have accounted for 12 to 13 percent, a total 17 to 18 percent contribution, although the shares vary over the business cycle. However, the housing share of GDP lagged during the post-Great Recession period due to underbuilding, particularly for the single-family sector.

Now, thanks to a surge in residential investment during 2020 and ongoing strength in 2021, housing’s share of GDP remains elevated compared to most of the post-Great Recession period, as market conditions created by the pandemic put a renewed focus on the importance of home. This was magnified by a shifting geography of housing demand accompanied by a lack of for-sale inventory. Housing continued to expand in 2021, although as the rest of the economy recovered, the housing share of the economy has tapered, Dietz said. However, the recent expansion in housing activity has increased these shares to near their historic norms.

Dietz sees the contribution from home construction to GDP continuing to expand as we emerge from the pandemic. The trend toward smaller homes is likely to reverse and the need for more single- family housing will grow. However, higher interest rates due to the Fed’s tightening monetary policy will impact housing affordability and could reduce momentum for single-family construction.