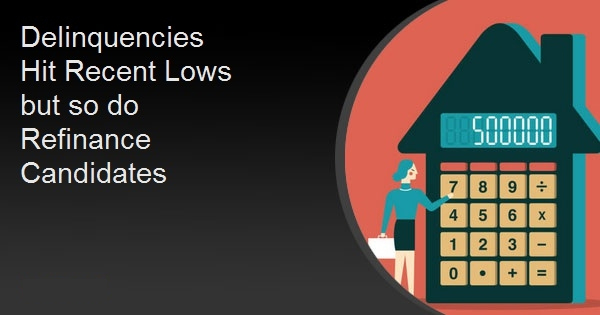 Delinquencies Hit Recent Lows but so do Refinance Candidates

In its first look at December’s loan performance data, Black Knight notes that 2021 ended with the foreclosure inventory at an all-time low and the national delinquency rate “just a hair off the near-record low” reached just before the onset of the pandemic.

That delinquency rate, the percentage of mortgages that are 30 or more days past due but not in foreclosure, was 3.38 percent in December, down by nearly 6 percent from November and 44.46 percent below its level in December 2020. This equates to 1.799 million delinquent loans, a decrease of 107,000 and 1.452 million from the two earlier periods.

Serious delinquencies, loans 90 or more days past due but not in foreclosure, are still elevated; 946,000 loans remain in that category including many that are still in forbearance. This is more than double the number pre-pandemic. Still, that is down by 80,000 loans in a single month and by 1.2 million since December 2020.

The foreclosure inventory, loans in the process of foreclosure, declined by 4,000 over the previous month to 128,000 loans. This is a record low and is down 90 percent year-over-year. It may not stay that low for long, however. Five months after the federal foreclosure moratorium expired, foreclosure starts may be increasing. There were 4,100 starts in December, a 10.81 percent increase from the prior month, although this is more than 40 percent fewer than the previous December.

Foreclosures are also ticking up. Black Knight expresses them as a percentage of the loans that are more than 90 days non-current. The 0.29 rate in December was 12.07 percent higher than the November rate and more than three times the rate a year earlier when the moratorium was in effect.

At the end of December, Black Knight reported there were 1.927 million non-current loans including those in foreclosure. This is 112,000 fewer than in November and 1.5 million less on an annual basis.

The prepayment rate dropped to 1.65 percent of active mortgages in December as interest rates began to rise. This is down by 7.31 percent from November and 47.60 percent from December 2020.

The company will provide a more in-depth review of the month’s mortgage performance data in its next Mortgage Monitor. It will be released on February 7.

In a separate report, Black Knight said that rising interest rates have slashed the number of homeowners who could benefit from refinancing by half since the first of the year. It defines refinance candidates as 30-year mortgage holders with a maximum 80 percent loan-to-value ratio and credit scores of 720 or higher, who could shave at least 0.75 percent off their current first lien rate by refinancing.

The company’s survey data says the average conforming rate offering climbed to just shy of 3.75 percent on Wednesday. Even given the latest 30-year rate of 3.56 percent from Freddie Mac (a 33 basis point increase since the first of the year), the number of high-quality refinance candidates has been cut from about 11 million at the start of the year to just 5.9 million.

The company adds that, even though this is a diminished population – there were as many as 20 million potential refinancers in late 2020 - if all were to refinance, they would still benefit from an aggregate monthly savings of nearly $1.6 billion or about $275 for each borrower per month.