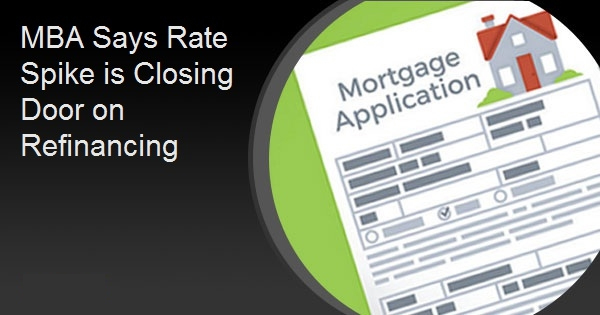 There was a small uptick in purchase mortgage activity during the first week of 2022. Refinancing held its own despite significant increases in interest rates.

The Mortgage Bankers Association (MBA) said its Market Composite Index, a measure of mortgage loan application volume, increased 1.4 percent on a seasonally adjusted basis from one week earlier. On an unadjusted basis, the Index was up 46 percent compared with the previous week. The data from the previous period had included an adjustment to account for Christmas Week.

The Refinance Index dipped 0.1 percent from the previous week and was 50 percent lower than the same week one year ago. The refinance share of mortgage activity decreased to 64.1 percent of total applications from 65.4 percent a week earlier.

The seasonally adjusted Purchase Index rose 2 percent and was up 51 percent on an unadjusted basis. The volume of purchase mortgage applications was 17 percent lower than the same week in 2021.

“Mortgage rates increased significantly across all loan types last week as the Federal Reserve’s signaling of tighter policy ahead pushed U.S. Treasury yields higher. The 30-year fixed rate hit 3.52 percent, its highest level since March 2020,” according to Joel Kan, MBA’s Associate Vice President of Economic and Industry Forecasting. “Rates at these levels are quickly closing the door on refinance opportunities for many borrowers. Although refinance activity changed little over the week, applications remained at their lowest level in over a month, and conventional refinance applications were at their lowest level since January 2020,”

The average contract interest rate for 30-year fixed-rate mortgages (FRM) with origination balances at or below the increased 2022 loan limit of $647,200 increased to 3.52 percent from 3.33 percent, with points decreasing to 0.45 from 0.48. The effective rate rose to 3.65 percent.

The average contract interest rate for 5/1 adjustable-rate mortgages (ARMs) jumped to 3.03 percent from 2.45 percent. Points fell to 0.20 from 0.33 and the effective rate was 3.10 percent. The ARM share of applications decreased to 3.1 percent from 3.3 percent.