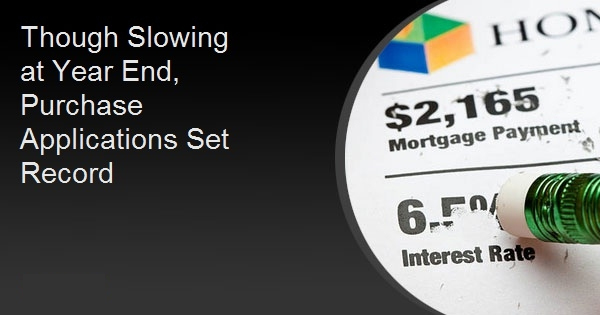 The Mortgage Bankers Association (MBA) closed, as they usually do, for the two-week holiday period. Its weekly report on mortgage application volume covers those two weeks with an adjustment to account for the holidays.

MBA’s Market Composite Index for the week ended December 30 decreased 2.7 percent on a seasonally adjusted basis compared to the December 17 reporting period. On an unadjusted basis, the Index was down 32 percent.

The holiday adjusted Refinance Index dipped 2 percent over the two weeks and was 40 percent lower than for the same period in 2020. The refinance share of mortgage activity, last reported at 65.2 of total applications, dropped to 63.9 percent the first week of the hiatus then increased to 65.4 percent during the most recent week.

The seasonally adjusted Purchase Index decreased 4 percent from two weeks earlier while it also dropped 32 percent on an unadjusted basis. That index was down 12 percent compared to the same week one year ago.

“Mortgage rates continued to creep higher over the past two weeks, as markets maintained an optimistic view of the economy. The 30-year fixed rate increased 6 basis points to 3.33 percent – the highest since April 2021. The higher rates to close 2021 caused refinance activity to decrease 2.2 percent. Refinance demand continues to dwindle, as many borrowers refinanced in 2020, and in early 2021 – when mortgage rates were around 40 basis points lower,” said Joel Kan, MBA’s Associate Vice President of Economic and Industry Forecasting. “The purchase market also finished the year on a slower note, with the final week coming in at the weakest since October 2021. Even though average loan sizes were lower, home price appreciation remains at very high levels.”

Added Kan, “Despite supply and affordability challenges, 2021 was a record year for purchase originations. MBA expects 2022 to be even stronger, with total purchase activity reaching $1.74 trillion.”

The rate for jumbo 30-year FRM, loans with balances exceeding the conforming limit, decreased 4 basis points to 3.31 percent. Points increased to 0.38 from 0.34 and the effective rate eased back to 3.45 percent.

The rate for 15-year fixed-rate mortgages was unchanged at 2.60 percent, with points increasing to 0.31 from 0.29.  The effective rate increased to 2.67 percent.

The average rate for 5/1 adjustable-rate mortgages (ARMs) dropped to 2.45 percent from 2.74 percent, with points increasing to 0.33 from 0.22. The effective rate fell to 2.82 percent. ARMs had a 3.3 percent share of the week’s applications, down 0.1 point from two weeks earlier.