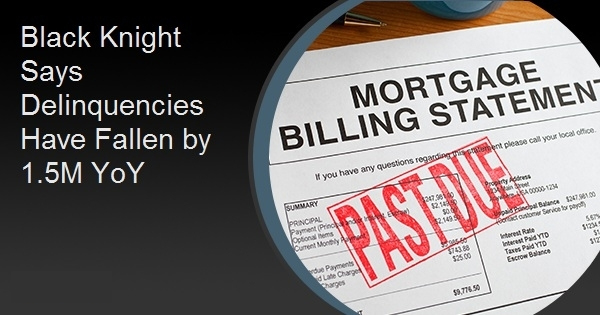 While serious delinquencies remain a concern, homeowners are recovering quickly from pandemic induced mortgage delinquencies. Black Knight's "first look" at November loan performance found a further decline in the nation's delinquency rate to 3.59 percent. This is a 4.11 percent improvement from October and down 43.29 percent from the rate in November 2020.

At the end of November there were 1.91 million homeowners who were 30 days or more past due on their mortgage loans but not in foreclosure, an improvement of 80,000 since the end of October. One year earlier 3.38 million loans were past due.

The number of serious delinquencies, loans more than 90 days past due but not in foreclosure, also dropped by 80,000 in a month. While 1.03 million loans remain in serious delinquency, this is 1.17 million fewer than in November 2020.

Even though the federal moratorium on foreclosures expired at the end of July, only 132,000 loans are in the foreclosure inventory, 0.25 percent of all active loans. Foreclosure starts in November totaled 3,700, down 7.50 percent month-over-month and 15.9 percent fewer than in November of last year. The company says both of those November foreclosure statistics are record lows.

Over 800,000 homeowners have exited forbearance programs over the last year. At the end of November about 560,000 loans remain in post-forbearance loss mitigation.

Black Knight says the sum of non-current loans, including those in foreclosure, was 2.04 million at the end of November. Delinquency rates were highest in Louisiana at 7.95 percent, Mississippi at 7.30 percent, and West Virginia at 5.54 percent but all three states have seen year-over-year improvement of at least 26 percent.