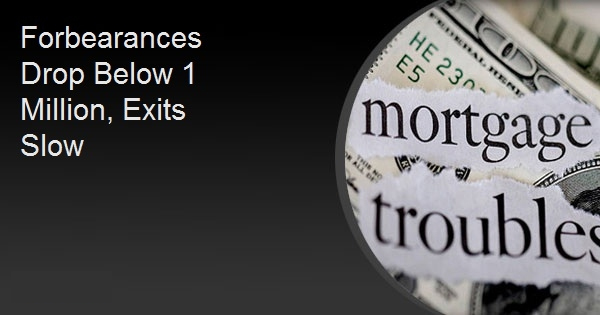 The first monthly report on the status of the COVID-19 related forbearance programs was released by the Mortgage Bankers Association (MBA) on Monday. MBA ceased weekly reporting on program participants effective October 31 at which time there were an estimated 1 million homeowners remaining in the program.

Fannie Mae and Freddie Mac forborne loans declined 16 basis points to 0.76 percent of those combined portfolios while the share of Ginnie Mae (FHA, VA, and USDA) loans dropped 42 basis points to 2.10 percent. The largest change was in portfolio loans and private-label securities (PLS). They declined 106 basis points to a 3.94 percent share.

"The share of loans in forbearance in November declined - albeit at a slower pace than October - as borrowers continued to near the expiration of their forbearance plans and moved into permanent loan workout solutions," said Marina Walsh, CMB, MBA's Vice President of Industry Analysis.

Total loans serviced that were current, that is not delinquent or in foreclosure, rose to a non-seasonally adjusted 94.58 percent of servicer portfolios in November from 94.32 percent in October. Of the total completed loan workouts, including repayment plans, loan deferrals/partial claims, loan modifications, completed from 2020 and forward, 83.69 percent were current as of November 30. That is down from 84.04 percent at the end of October.

"More borrowers were current on their mortgage payments in November compared to October. This coincides with continued improvement in the labor market - faster wage growth and the unemployment rate dropping to 4.2 percent," said Walsh. "While there was some deterioration in the performance of borrowers in post-forbearance workouts, four out of five overall remained current through November."