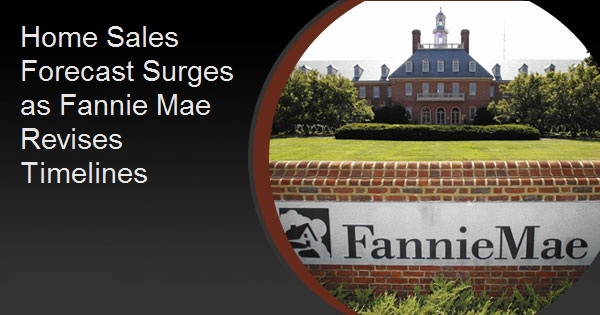 Fannie Mae jumped up its forecast for real GDP on a Q4/Q4 basis this week, revising it from 4.8 percent in last month's report to 5.5 percent. The company's economists said they believe this strength partially reflects a pulling forward of growth from 2022, so their estimate for next year has been revised downward by a half point to 3.2 percent. They also said that incoming data for both economic growth and home sales for 2021 were stronger than anticipated. "We continue to expect both to decelerate, but our prior call on the timing appears to have been premature," the December report says.

Existing home sales moved higher in October, increasing 0.8 percent to an annualized 6.34 million units. Pending sales, a leading indicator of existing sales, rose 7.5 percent and purchase mortgage applications also moved higher and, along with other metrics such as days on the market and the ratio of sales to list price, indicate a reversal of previous softening. While this may indicate that some buyers are moving plans forward in anticipation of higher interest rates, they might also mean stronger near-term sales than earlier anticipated. Fannie Mae has made large adjustments to total home sales in Q4 2021 and early 2022, expecting them to rise 7.1 percent compared to 2020, up from the previous 5.3 percent gain. Those sales will soften next year, dipping by 1.4 percent as inventory problems persist and affordability becomes a larger concern, and decline another 3.8 percent in 2023.

Right now, it is the lack of listings that are constricting home sales, but the company expects that ongoing price hikes coupled with upwardly drifting mortgage rates will make affordability the limiting factor next year. Demand has been buoyed, in part, by higher-income renters moving into the market and with stimulus checks bolstering downpayment funds. This probably pulled home purchases forward, both because of low interest rates and to meet changing needs due to the pandemic.

With prices continuing to rise and savings diminishing over time, the pool of buyers able to buy is likely shrinking. Secondary market data shows that the average back-end debt-to-income ratio (DTI) for first-time homebuyers was moving up meaningfully through October, suggesting increasing affordability pressure. A similar increase in 2018 foreshadowed a slowdown in sales and house price growth, while regional variation helped explain where the slowdown was greatest. This indicator appears to be similarly pointing to softening purchase demand in 2022 with some of hotter metro areas perhaps confronting outsized deceleration. Higher home prices are supportive of home construction, but builders continue to face labor and supply chain problems which are limiting new home sales. The total number of single-family homes under construction rose again in October to the highest level since May 2007, an unprecedented order backlog, and builders report purposely limiting sales because they can't keep up with production. Fannie Mae expects supply problems will persist through next year, but also that more homes will be completed over time, adding to inventory, and freeing up some capacity so starts can increase. Data on lots under development also indicate that builders are preparing to make significantly more homes available next year. New home sales should accelerate by mid-2022 along with a modestly faster pace of construction starts. The added inventory and a waning of demand will put some downward pressure on home price growth and the company expects the 16.6 percent growth this year, as measured by the Federal Housing Finance Agency (FHFA) index, will wind down to 7.4 percent in 2022. Uncertainty regarding inflation, monetary policy, and interest rates also have implications for housing activity. A mortgage rate spike due to upwardly adjusting inflation expectations would probably mean a faster slowdown in sales and price growth. However, should there be an expectation of slower growth, rates could fall, sparking home sales and moving a slowdown to later in the forecast horizon.

The company still expects to see some upward drift of both the ten-year Treasury and the 30-year mortgage rate although they have modestly reduced that path relative to their prior projection. It sees the 30-year mortgage rate averaging 3.2 percent for 2022 and 3.5 percent for 2023 but adds that uncertainty over the future path of monetary policy and how markets will respond to it leads to a wide range of plausible rate paths moving forward.

The revised sales along with a slightly lower estimate of interest rate growth has allowed Fannie Mae to increase its forecast for mortgage originations. There are small revisions to the purchase origins, consistent with those to the housing outlook. This year's purchase volume will total $1.9 trillion, $13 billion higher than last month's forecast. Volumes will grow 8 percent in 2022 to $2 trillion, a small upgrade from last month's forecast. Volumes will flatten in 2023 as rising prices offset slowing home sales.

The outlook for refinances was revised higher by $27 billion to $2.6 trillion this year and the 2022 forecast was raised by $49 billion to $1.3 trillion, as the lower mortgage rate forecast boosts volume. The projection for 2023 is unchanged. At the current 3.1 percent mortgage rate, an estimated 38 percent of outstanding mortgage balances have at least a 50-basis point incentive to refinance.

These revisions will bring total originations to $4.5 trillion rather than $4.4 trillion in the previous version. For 2022 and 2023, originations are expected to be $3.4 trillion and $3.1 trillion, respectively, representing an $86 billion upward revision for 2022 and a minimal change to 2023.

The economists see accelerating inflation and the market and policy responses to it as posing a significant risk to its outlook. Price gains are now likely weighing on consumer spending and are expected to prompt a more aggressive pace of Federal Reserve tightening. During this period of monetary policy transition, long-run interest rates could move significantly in either direction depending on market perceptions of how successful monetary and fiscal policy will be at containing inflation without excessively slowing growth. Rate uncertainty is therefore a major risk.

The November Consumer Price Index (CPI) showed annual inflation hitting 6.8 percent, the highest in 39 years, and Fannie Mae projects it to average 7.0 percent in Q1 2022 before decelerating to 3.8 percent by the end of 2022. The Fed's preferred measure, the core PCE deflator, could average 4.8 percent annually in Q1, well above the long-term target of 2 percent.

The company now expects a 25-basis point Fed interest rate hikes in the second and fourth quarters of 2022 and continuing quarterly through 2023. It believes there could be more aggressive tightening if inflation fails to decelerate in coming months due to supply chain issues taking longer to resolve, consumer spending remaining more robust, or if energy prices spike relative to its expectations.