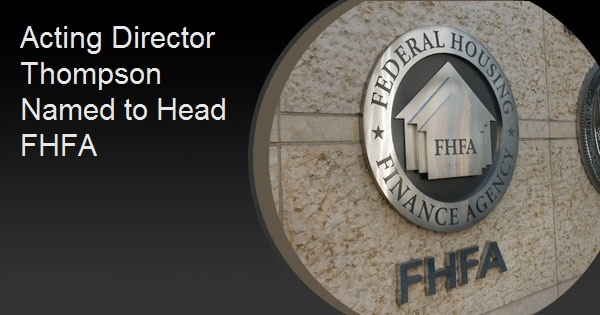 The current acting director of the Federal Housing Finance Agency has been nominated to officially run the agency. The White House announced on Tuesday that Sandra L. Thompson's name will be submitted to the Senate for formal confirmation to the post.

Before being named as acting director earlier this year Thompson had served as FHFA's deputy director of Housing Mission and Goals since 2013, overseeing FHFA's housing and regulatory policy, capital policy, financial analysis, fair lending, and all mission activities for Fannie Mae, Freddie Mac, and the Federal Home Loan Banks. She also worked for the Federal Deposit Insurance Corporation (FDIC), for more than 23 years in a variety of leadership positions, most recently as Director of the Division of Risk Management Supervision. Thompson is a native of Chicago and a graduate of Howard University.

Bob Broeksmit, president and CEO of the Mortgage Bankers Association (MBA) called Thompson the "perfect choice to lead FHFA," and hoped for a quick confirmation. He added, "Since assuming the position of Acting Director in June, Thompson has addressed several topline issues, including reversing the adverse market refinance fee, calling for the continuation of pandemic-related flexibilities, enhancing the GSEs' new refinance programs for low-income borrowers, and overseeing the GSEs' mission of creating equitable and sustainable solutions for affordable housing and rental opportunities.