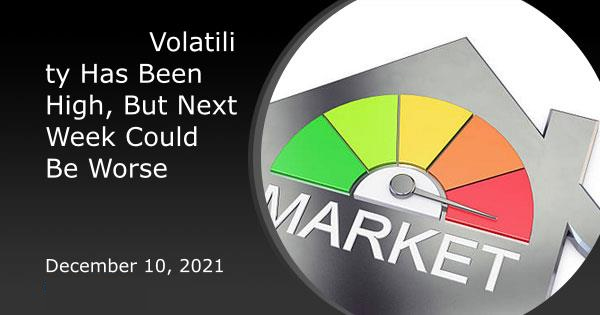 Volatility Has Been High, But Next Week Could Be Worse

Financial market volatility increased noticeably after the emergence of the omicron variant. Last week, that proved to be good for rates and bad for stocks. This week was a different story.

While the collective view of omicron remains cautious, several high profile comments pushed back against the defensive reaction seen in the previous week.  Stocks eagerly bounced back toward pre-omicron levels and bonds reluctantly followed.

If anything, the half-hearted move in the bond market is encouraging for rates.  It speaks to a certain level of demand in the marketplace in light of other headwinds.

Several of those headwinds have already been resolved this week.  They included things like the scheduled Treasury auction cycle, elevated corporate bond issuance, and the release of the CPI (consumer price index) inflation data for November.

While CPI rose to the highest levels in more than 30 years, the number was right in line with economists' forecasts.  Traders were prepared for it to be a bit higher than expected based on the bond market rally that followed. Bonds don't like inflation, so if yields are falling after an inflation report, bond traders were prepared for the news to be worse.

If traders are nervous, it has a lot to do with next week's scheduled policy announcement from the Federal Reserve.  Fed speakers have been vocal about the likelihood that tapering needs to accelerate.

"Tapering" refers to the gradual decrease in the amount of bonds the Fed buys each month.  That bond buying is thought to be an important ingredient in the low interest rate equation.  In the past, rates moved quickly higher when tapering was announced.

This time around, we already knew about tapering.  In fact, the process has already begun.  But the Fed is increasingly concerned about inflation--concerned enough to taper at a faster pace in order to remove accommodation from the economy.  The Fed has also generally conveyed that it would like to finish tapering before hiking the Fed Funds Rate--a policy change meant to fight inflationary pressures.

By coming in "as-expected," this week's inflation data only adds to next week's potential volatility.  Had inflation been much higher than expected, we would have seen rates move up on Friday in order to prepare for the likelihood of tougher talk from the Fed.

Had inflation been lower than expected, we would have seen the opposite move.

As it stands, the market is fairly split as to what the Fed will say.  They have several options ranging from "doing nothing" all the way to doubling the current pace of tapering.  If they choose either of those extremes, the ensuing volatility would also be extreme--at least in the context of recent trading ranges.

In addition to the Fed's decision on tapering, this will also be one of the 4 meetings per year that includes updated economic projections.  The most important part of those projections is the forecast for future rate hikes, affectionately known as "the dots" due to its presentation in dot plot format.

A lot has happened between now and the previous release of the dots back in September.  That means the market consensus could be farther away from the Fed consensus than normal.  The bigger that gap, the greater the potential volatility.  The Fed announcement and dot plot will be released on Wednesday afternoon at 2pm ET.