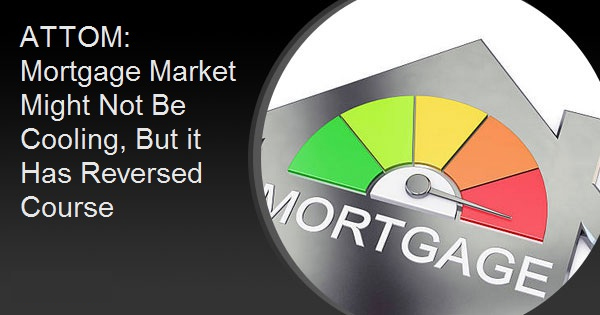 ATTOM: Mortgage Market Might Not Be Cooling, But it Has Reversed Course

A new report from ATTOM says that the number of mortgage originations dropped sharply in the third quarter. The company says there were 3.59 million residential mortgages originated during that period, a 3,2 percent increase over the 3.48 million during the same quarter in 2020, but an 8.4 percent decline from the 3.92 million originations in the second quarter of 2012, the largest quarterly dip in more than a year.

The quarter-over-quarter slide followed another in Q2 and marked the first time in more than two years that total lending decreased in two consecutive quarters. It was also the first time in any year since at least 2000 that total lending activity went down from both the first to the second quarter and from the second to the third quarter of any year, usually are peak homebuying seasons. The two-quarter decline hit both refinancing and purchase lending, masking an increase in home-equity lines of credit (HELOCs).