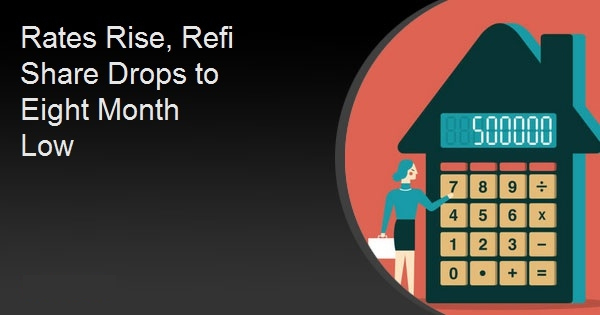 Thanksgiving week, a three-day business week for many, saw the usual sharp decline in mortgage activity although purchase applications remained seasonally strong. The Mortgage Bankers Association (MBA) says its Market Composite Index, a measure of mortgage application volume, fell 7.2 percent on a seasonally adjusted basis from one week earlier and was down 37 percent on an unadjusted basis.

The Refinance Index decreased 15 percent during the week which ended November 26 and was 41 percent lower than the same week one year ago. The refinance share of mortgage activity decreased to 59.4 percent of total applications from 63.1 percent the previous week. It was the lowest share for refinancing since early April.

"Mortgage rates rose for the third week in a row, reducing the refinance incentive for many borrowers. The 30-year fixed rate hit 3.31 percent - the highest since this April - and led to refinance applications falling more than 14 percent. Over the past three weeks, rates are up 15 basis points and refinance activity has declined over 18 percent," said Joel Kan, MBA's Associate Vice President of Economic and Industry Forecasting. "Despite higher mortgage rates, purchase applications had a strong week, mostly driven by a 6 percent increase in conventional loan applications. Conventional loans tend to be larger than government loans, and this was evident in the average loan amount, which increased to $414,700 - the highest since February 2021. As home-price appreciation continues at a double-digit pace, buyers of newer, pricier homes continue to dominate purchase activity, while the share of first-time buyer activity remains depressed."

The average contract interest rate for 30-year fixed-rate mortgages (FRM) with conforming loan balances of $548,250 or less increased to 3.31 percent from 3.24 percent, with points increasing to 0.43 from 0.36 The effective rate was 3.43 percent.

The rate for jumbo 30-year FRM, loans with balances that exceed the conforming limit, was down 1 basis point to 3.27 percent. Points rose to 0.35 from 0.26 and the effective rate increased to 3.37 percent.

The average contract interest rate for 5/1 adjustable-rate mortgages (ARMs) fell to 2.48 percent from 3.00 percent, with points decreasing to 0.27 from 0.32. The effective rate dropped to 2.58 percent. The adjustable-rate mortgage (ARM) share of activity increased to 3.6 percent of total applications from 3.4 percent the prior week.