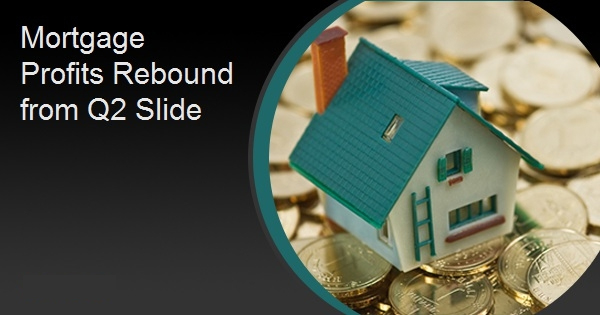 While the profits were nowhere near 2020 levels, independent mortgage banks and mortgage subsidiaries of chartered banks reported their third quarter 2021 gains did improve on those in Quarter 2. The report from the Mortgage Bankers Association (MBA) on mortgage bankers' performance showed an average net gain of $2,594 on each loan that was originated during the quarter. This was up from a reported gain of $2,023 per loan in the second quarter of 2021,

Marina Walsh, MBA's Vice President of Industry Analysis noted the rebound from declining profits in the second quarter, but said profits were down more than half from the record profit a year earlier. "Production revenue was the difference-maker, increasing more than 20 basis points from the second quarter. However, production revenue was still down almost 80 basis points compared to a year ago," she said.

Added Walsh, "Per-loan production expenses continued to rise for the fifth consecutive quarter, reaching the second-highest level ever reported. Rising sales costs that are often determined based on a percentage of loan balances was one primary factor for the increase in expenses. The average loan balance for first mortgages reached another study-high in the third quarter, passing the $300,000 threshold for the first time to over $308,000." That new high for first mortgages was $308,237. The average in the second quarter was $297,816.

Combining both production and servicing operations, 92 percent of firms posted overall profitability for the third quarter of 2021, compared to 84 percent in the second quarter.

Average production volume was $1.17 billion per company, a decline of $0.18 billion from the previous quarter. Companies originated an average of 3,889 loans during the quarter, against 4,615 in Q2.

Eighty-four percent of the 365 companies that reported production data for the quarter of 2021 were independent mortgage companies. The remaining 17 percent were subsidiaries and other non-depository institutions.