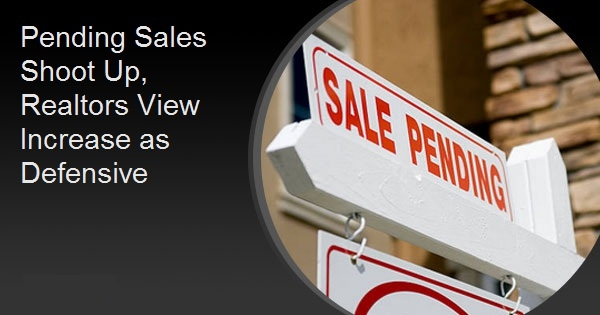 The number of signed contracts for the purchase of existing homes made another significant about face in October. The National Association of Realtors® (NAR) said its Pending Home Sales Index (PHSI), a measure of those new contracts, increased 7.5 percent from September to a reading of 125.2. The index had recovered from three straights months of losses in August, rising 8.1 percent, only to slip back in September by 2.3 percent. The increase still left the PHSI behind the index level of a year earlier by 1.4 percent.

Analysts had expected the index to rise, but by a much more modest amount. Those polled by Econoday had a consensus estimate of a 0.7 percent gain. Forecasts ranged from a 1.0 percent decline to growth of 2.9 percent.

"Motivated by fast-rising rents and the anticipated increase in mortgage rates, consumers that are on strong financial footing are signing contracts to purchase a home sooner rather than later," said Lawrence Yun, NAR's chief economist. "This solid buying is a testament to demand still being relatively high, as it is occurring during a time when inventory is still markedly low.

He added, "The notable gain in October assures that total existing-home sales in 2021 will exceed 6 million, which will shape up to be the best performance in 15 years."

Despite his conviction that the market will remain robust, the economist forecasts that home prices will rise at a gentler pace over the course of the next several months and expects demand to be milder as mortgage rates increase.

The PHSI rose in all four major regions although it continued to lag on an annual basis in two of them. The improvement was strongest in the Midwest and South. In the former, the index climbed 11.8 percent to and was higher by 5.1 percent compared to October 2020. In the South, pending home sales transactions were 8.0 percent higher than in September, and the PHSI reading of 149.7 was up 0.6 percent year-over-year.

The index in the Northeast was up 6.9 percent for the month, but still lagged the previous October by 10 percent. The West gained 2.1 percent month-over-month, but pending sales remained 6.2 percent behind those a year earlier.

The PHSI is based on a large national sample, typically representing about 20 percent of transactions for existing-home sales. In developing the model for the index, it was demonstrated that the level of monthly sales-contract activity parallels the level of closed existing-home sales in the following two months. Existing home sales numbers for November will be released on December 22.