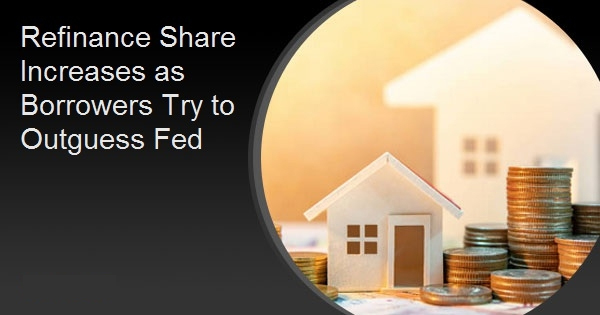 The Mortgage Bankers Association (MBA) reports that the volume of loan applications submitted during the week ended November 19 increased slightly, continuing the weekly up and down pattern that has prevailed since the beginning of October. MBA says its Market Composite Index, a measure of that volume, increased 1.8 percent on a seasonally adjusted basis from one week earlier and was 0.1 percent higher on an unadjusted basis.

The seasonally adjusted Purchase Index rose 5 percent from one week earlier, but volume was down 0.4 percent on an unadjusted basis from the previous week and was 4 percent lower than the same week one year ago.

"The financial markets continue to discern the Federal Reserve's policy path in the coming months in light of the current high growth, high inflation environment. Despite a fair amount of rate volatility last week, mortgage rates were higher, with the 30-year fixed rate increasing 4 basis points to 3.24 percent," said Joel Kan, MBA's Associate Vice President of Economic and Industry Forecasting. "Despite the increase in rates, refinance applications rose slightly, driven by a 2 percent gain in conventional refinances. Borrowers continue to lock in mortgages in anticipation of higher rates in the future. Refinance applications were still more than 30 percent below a year ago, when the 30-year fixed rate was 32 basis points lower."

Added Kan, "Purchase activity increased for the third straight week, as housing demand remains robust, even as the housing market approaches the typically slower holiday season. Both conventional and government loan applications increased, and the average loan size for a purchase loan was at $407,200, continuing its ongoing 2021 run of being mostly above $400,000."

The average contract interest rate for 30-year fixed-rate mortgages (FRM) with origination balances at or below the conforming limit of $548,250, increased to 3.24 percent from 3.20 percent, with points decreasing to 0.36 from 0.43. The effective rate rose to 3.35 percent.

The average rate for 30-year jumbo FRM, loans with balances above the conforming limit, increased to 3.28 percent from 3.26 percent, with points decreasing to 0.26 from 0.39. The effective rate decreased to 3.35 percent.

Fifteen-year FRM had an average rate of 2.59 percent, up 3-basis points from the prior week. Points dipped to 0.34 from 0.36, and the effective rate increased to 2.65 percent.

The average contract interest rate for 5/1 adjustable-rate mortgages (ARMs) was 3.00 percent with 0.32 point, up from 2.89 percent with 0.16 point. The effective rate was 3.11 percent. The ARM share of activity increased to 3.4 percent of total applications from 3.2 percent.