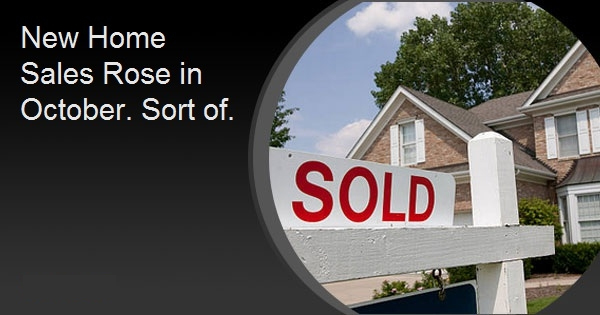 New home sales improved slightly on the unexpected, reported surge in September and still managed to disappoint. The U.S. Census Bureau and the Department of Housing and Urban Development report that sales of new single-family homes ticked up 0.4 percent in October to 745,000 seasonally adjusted annual units but that change was from a downwardly revised September rate of 742,000 units. September's sales were originally reported at an 800,000 rate. October's sales were 23.1 percent below the October 2020 rate of 969,000.

Sales in the Northeast were down 11.8 percent from September and 26.8 percent year-over-year. Sales rose 11.0 percent for the month in the Midwest but were 28.3 percent lower than at the same point in 2020.

The South saw an 0.2 percent uptick in sales for the month but a 16.7 percent annual decline while sales in the West were lower by 1.1 percent and 33.1 percent for the two earlier periods.

At the end of the reporting period there were 389,000 new homes for sale, estimated at a 6.3-month supply at the current rate of attrition. In September, the supply was estimated at 6.1 months and was 3.5-months in October 2020. The current report represents an 80 percent year-over-year improvement in inventory.