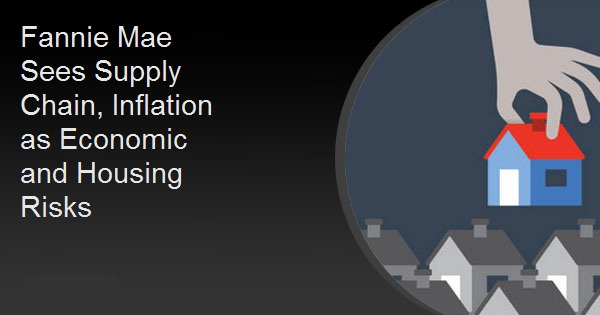 The ink wasn’t dry on Fannie Mae’s October economic forecast when the month’s Consumer Price Index (CPI) was published showing an inflation rate two-tenths higher than the company’s economists had predicted. Fannie Mae’s November forecast now says their already upwardly revised Q4 2021 forecasts of 6.2 and 4.6 percent for annual topline and core CPI respectively, are likely too low and they think a longer lasting inflationary period is now more likely. This leads them to conclude the Federal Reserve will stop purchasing securities for their portfolio by mid-year and begin raising the Federal Funds rate target in the fourth quarter of 2022.

They continue to expect 4.8 percent growth this year, 3.7 percent in 2022, and in their first forecast for 2023, they expect a GDP of 2.1 percent and an unemployment rate of 3.7 percent. They also expect both the CPI and the core level to be near 3.0 percent by the end of 2023 and that the Fed will hike their funds rate in 25-basis point increments starting in the fourth quarter of next year. They see little possibility that those increases will start while the Fed is still tapering security purchases but are open to the possibility that tapering will be accelerated.

They see several risks to their forecast. The speed at which global supply chain disruptions are resolved will matter both for the near-term alleviation of supply bottlenecks as well as for longer term restructuring. The extent to which labor supply returns to the pre-COVID trend or remains short will impact wage costs and productivity. Inflation continues to exceed previous expectations and further increases are possible which would weigh more heavily on consumer spending. The Federal Reserve’s beliefs regarding the passing or sustained level of inflation and resulting monetary policy actions will be key. Their choices will impact economic growth as well as housing and mortgage activity. Fiscal policy will also play a role. The month’s forecast incorporates the recently passed infrastructure bill but, given that the bulk of new spending is to occur after 2023, it has minimal forecast impact. The larger fiscal package that just passed in the House is not included in the outlook due to uncertainty over details and timing.

The company has upgraded its home sales forecast for the remainder of this year to a 5.3 percent annual increase due to a stronger than expected existing home sales report for September. They continue to maintain, however, that this increase is temporary as the inventory supply for the month moved down to 2.4 months, a new record low for a September. At the same time, the inflow of new listings was only slightly higher than at the same time in 2019 while sales were up 17 percent. They see sales softening next year partly due to inventory shortages. Demand for housing is expected to remain “robust” but to decline somewhat. Affordability pressures will increase with the strong price gains already baked in and the modestly higher mortgage rates anticipated. The company continues to believe that much last year’s strength in home purchases was borrowed from the future as first-time buyers (and we now have an acronym for that – FTHB) moved forward their purchases due to COVID-related disruptions, and to take advantage of historically low mortgage rates. Also, as savings from past stimulus checks are gradually depleted, that money will no longer be available to fund ever-larger down payments to keep pace with rising home prices. The size of the typical down payment for first-time homebuyers has recently been about ten thousand dollars higher than what it was pre-COVID, helping to keep the size of mortgage payments in check.

The high rate of appreciation and tight inventories should continue to support new home construction and thus help alleviate some supply pressures. However, home construction continues to be hampered by supply chain disruptions and labor shortages. Many of the homes sold in September, as new home sales jumped 14 percent, had not yet been started. Fannie Mae made only modest revisions to their forecast and are still expecting an acceleration in new home sales over the coming quarters as more projects are completed, along with a modest increase in the pace of starts. If labor and materials were not constrained, they would expect a brisker pace of construction as demand would appear to support it. If those constraints can be resolved faster than expected there is an upside risk to the pace of housing starts and new home sales. As such, despite upward drifting mortgage rates and a slowing in economic growth expected in 2023, this continued unmet demand drives a projection of comparatively elevated construction in their 2023 forecast.

The economists forecast the 30-year mortgage rate to be 3.4 percent by end of 2022 and 3.5 percent at end of 2023, a modest rise from current levels. The Fed has taken pains to broadcast its tapering and rate hiking plans to avoid a repeat of the 2013 temper tantrum, when market expectations suddenly shifted regarding the long-run real rate, and for now both financial market and survey measures of long-term inflationary expectations remain mostly anchored and the company expects those effects are largely “baked in,” leading to only a modest drift upward in mortgage rates over the next few years. The risk, however, is that if longer-run inflation expectations start rising meaningfully, then rates could move decidedly higher. Alternatively, if higher inflation prompts a more aggressive Fed tightening going forward and this is seen as risking another recession, long rates could start falling again, inverting the yield curve.

The totals include minor revisions to last month’s purchase mortgage origination forecast, an $18 billion increase to $1.9 trillion. Purchase volumes are expected to grow 6.8 percent in 2022 to $2.0 trillion, a slight downgrade from the October forecast and they decelerate in 2023, growing just 2.3 percent from the prior year, as rising prices slightly outweigh declining sales.

The forecast for refinance volume was revved up by $71 billion to $2.5 trillion this year. Strong incoming application data are somewhat offset by this month’s modestly higher interest rate expectations. In 2022 and 2023, refi volumes are expected to decline to $1.3 trillion and $1.1 trillion, respectively, as the higher rate forecast drags on refi volumes. At the current mortgage rate of 2.98 percent, about 43 percent of outstanding mortgages are thought to have at least a 50-basis point incentive to refinance.