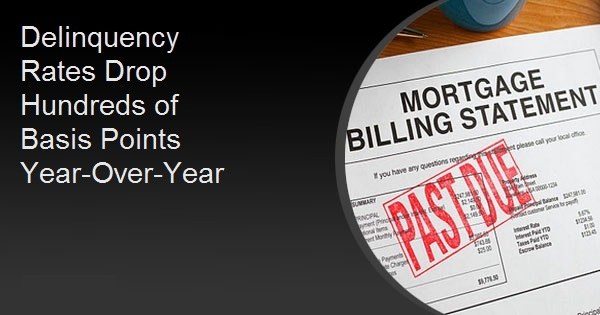 The delinquency rate includes all loans that are 30 or more days past due but not in foreclosure. For the purposes of MBA's National Delinquency Survey, servicers were asked to report loans in forbearance if payments are not made as required by the original terms of the mortgage.

On a quarter-over-quarter basis early delinquencies increased by 10 bps to 1.51 percent while the 60-day bucket was unchanged at 0.52 percent. The improvement was in serious delinquencies, those loans 90 or more days past due. That rate decreased 68 bps to 2.85 percent. Marina Walsh, MBA's Vice President of Industry Analysis said, "For the fifth consecutive quarter, the mortgage delinquency rate declined, commensurate with a decline in the U.S. unemployment rate over the same time period. The improvement was driven entirely by a decline in later-stage delinquent loans - those loans that are 90 days or past due, but not in foreclosure. By the end of the third quarter, many borrowers were approaching the 18-month expiration point of their forbearance terms and were being placed in permanent home retention solutions, such as modifications and loan deferrals. Once these borrowers entered permanent post-forbearance workouts and resumed payments, they moved from delinquent to current status."

Even as the effects of the pandemic are fading, she said, there are other, more localized reasons for delinquencies. She pointed to Louisiana, where the rate increased by 118 bps during the quarter because of the impact of Hurricane Ida. Wyoming saw a more modest increase of 3-basis points due to wildfires in the state. These increases may have contributed to a rise in early-stage delinquencies in national numbers.

The end of the foreclosure moratorium for government backed loans on July 31 has had little effect. Walsh said the quarter's foreclosure starts during the quarter matched an all-time survey low in 2020 and the foreclosure inventory fell again. "Homeowners, investors and servicers have better options than proceeding with a costly and time-consuming foreclosure process," she said.

All three loan types reached the lowest delinquency levels since the first quarter of 2020 when the COVID-19 pandemic began. The rate for conventional loans was down 34 bps to 3.55 percent, a 238-bps annual drop. The FHA rate declined 143 bps and 425 bps from the two earlier periods to 11.34 percent. The VA rate improved 66 basis points from the second quarter and 235 bps from a year earlier to 5.81 percent.