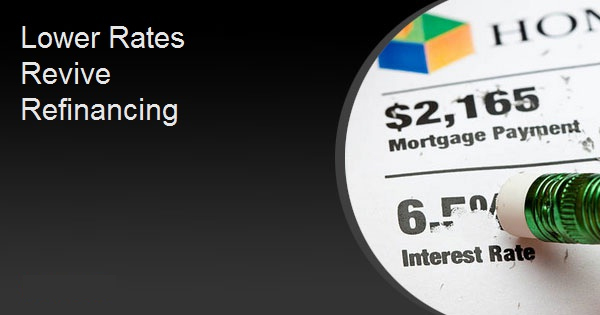 Refinancing rebounded during the week ended November 5, driving the volume of mortgage applications to their largest week-over-week increase since late July. The Mortgage Bankers Association (MBA) said its Market Composite Index, a measure of that volume, gained 5.5 percent on a seasonally adjusted basis and 5.0 percent unadjusted

The Refinance Index moved higher for the first time since the week ended September 17, rising 7.0 percent compared to the prior week but it was 28 percent lower than the same week one year ago. The refinance share of mortgage activity increased to 63.5 percent of total applications from 61.9 percent during the week ended October 29.

The Purchase Index was up 3.0 percent on an adjusted basis and 0.1 percent unadjusted. It lagged the index for the same date in 2020 by 4.0 percent.

"Mortgage rates moved lower for the second week in a row for all loan types. The 30-year fixed rate decreased to 3.16 percent and has declined 14 basis points over the past two weeks. Although overall activity remains close to January 2020 lows, homeowners acted on the decrease in rates. Refinance activity was up 7 percent overall, with gains in both conventional and government refinances. Additionally, the average loan balance for a refinance application was the highest in a month," said Joel Kan, MBA's Associate Vice President of Economic and Industry Forecasting. "Purchase applications were also strong last week, increasing just under 3 percent and down only 4 percent from last year's pace. The dip in rates might have helped to bring some buyers back into the market, but housing inventory is still extremely low and price growth remains elevated."

The average contract interest rate for 30-year fixed-rate mortgages (FRM) with balances at or below the conforming limit of $548,250 decreased to 3.16 percent from 3.24 percent, with points remaining unchanged at 0.34 The effective rate decreased to 3.26 percent.

Jumbo 30-year FRM, loans with balances exceeding the conforming limit, had an average rate of 3.26 percent, 3 basis points lower than the prior week's rate. Points increased to 0.32 from 0.27 and the effect rate dipped to 3.35 percent.

Fifteen-year FRM had an average rate of 2.52 percent compared to 2.58 percent a week earlier. Points increased to 0.33 from 0.29 and the effective rate declined to 2.60 percent.

The average contract interest rate for 5/1 adjustable-rate mortgages (ARMs) decreased to 2.82 percent from 2.88 percent, with points increasing to 0.25 from 0.11. The effective rate fell to 2.91 percent. The ARM share of activity decreased to 3.1 percent from 3.2 percent the previous week.

MBA's latest Forbearance and Call Volume Survey put the number of loans remaining in forbearance as of October 31 at 2.15 percent of the 36.6 million mortgage universe. This is down 9 basis points from the prior week and translates to 1 million homeowners. Of those loans, 15.8 percent are in their initial forbearance term, 73.9 percent are in an extension, and 10.3 percent are forbearance re-entries, including re-entries with extensions.

"One million homeowners remained in forbearance as we reached the end of October, but the forbearance share continued to decline, with larger declines for portfolio and PLS loans," said Mike Fratantoni, MBA's Senior Vice President and Chief Economist. "More borrowers who exited forbearance the last week of October went into modifications, a sign that they have not yet regained their pre-pandemic level of income."

Added Fratantoni, "The strong job market report from October, with another drop in the unemployment rate and a pickup in wage growth, is a positive sign for homeowners still struggling to get back on their feet."

This Forbearance and Call Volume Survey covers the period from October 25 through October 31 and represents 73 percent of the first-mortgage servicing market. loans). This will be the final weekly forbearance report from MBA. It will now report on the program on a monthly basis.