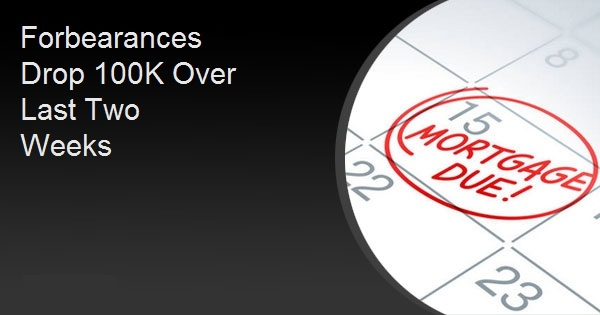 Following a quiet week in which only 19,000 homeowners exited forbearance, Black Knight reports that the week ended November 2nd saw 85,000 departures. The typical month-end surge marked the final expiration of many forbearance plans which have a maximum term of 18 months.

The largest declines were in FHA and VA plans, 42,000 exited on top of 7,7 00 the previous week. There was also a strong improvement in the number of Fannie Mae and Freddie Mac (the GSEs) participants with 22,000 homeowners leaving the program. Servicers had processed out 7,900 GSE loans during the week ended October 26.  Loans serviced for bank portfolios and private label securities (PLS) saw the smallest declines both weeks, a total of 24,300 loans.

At the end of the last reporting period, Black Knight said a total of 1.14 million loans remain in forbearance, 2.1 percent of all active mortgages. The total includes 344,000 GSE loans, 1.2 percent of those combined portfolios, 424,000 VA and FHA loans (3.5 percent), and 369,000 portfolio/PLS loans (2.8 percent). The loans remaining in the program represent $212 billion in unpaid principal.

Black Knight says the number of forborne loans has declined by 332000 since the same point in October. Further improvement is likely next week as services still have 129,000 loans with terms that expired in October that have yet to be reviewed. Three-quarters of those are expected to have reached the final month of their plans.

The company says new entrants to the program fell by 8 percent over the recent week. Restart activity fell to its lowest level since early October.